Following the resumption of negotiations on July 30, 2013, Israeli violations of international law and human rights continued unabated. Rather than demonstrate goodwill during this period, Israel has done the opposite, with the aim of derailing the US peace efforts led by Secretary of State Kerry.

Since the resumption of negotiations, 56 Palestinians have been killed and 897 injured by Israeli military and security officials. This includes the killing of a 15-year old boy who was shot in the back and killed by Israeli forces on December 9, 2013 near his school in the Jalazone refugee camp.

According to Amnesty International, "Israeli forces have repeatedly violated their obligations under international human rights law by using excessive force to stifle dissent and freedom of expression, resulting in a pattern of unlawful killings and injuries to civilians, including children, and have been permitted to do so with virtual impunity due, in no small part, to the authorities’ failure to conduct thorough, impartial and independent investigations"1

Since the resumption of negotiations, there have been 550 settler attacks on Palestinian civilians and property, including places of worship. Settlers act with impunity, often enjoying the support and protection of Israeli soldiers. Settlers are rarely arrested, let alone prosecuted or convicted. At the same time, the conviction rate for Palestinians tried by the Israeli military justice system is around 99%, as per a 2006 study by an Israeli human rights NGO (Yesh Din) and a 2011 study by the Israeli newspaper Haaretz.

Since the resumption of negotiations, work has began on 10,509 housing units2. Furthermore, Israeli settlement construction in the occupied West Bank increased by more than 123% in 2013 as compared to 2012, according to new data published by the Israeli Central Bureau of Statistics.3

While settlement expansion has increased, Israeli authorities have destroyed 146 Palestinian homes and properties since the resumption of negotiations.

Since the resumption of negotiations, Israel conducted 3767 military raids and arrested almost 3061 Palestinians4.

The Orient House, the Chamber of Commerce and dozens more Palestinian institutions in East Jerusalem continue to be closed by Israel, in defiance of its obligations under the Road Map to Peace.

Without being held accountable by the US and the international community, Israel will continue behave as a country above the law. For a just peace to prevail, impunity must be replaced with accountability. 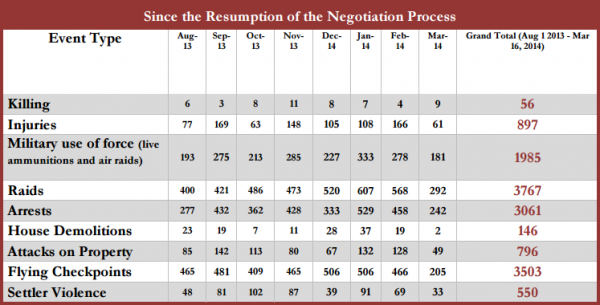 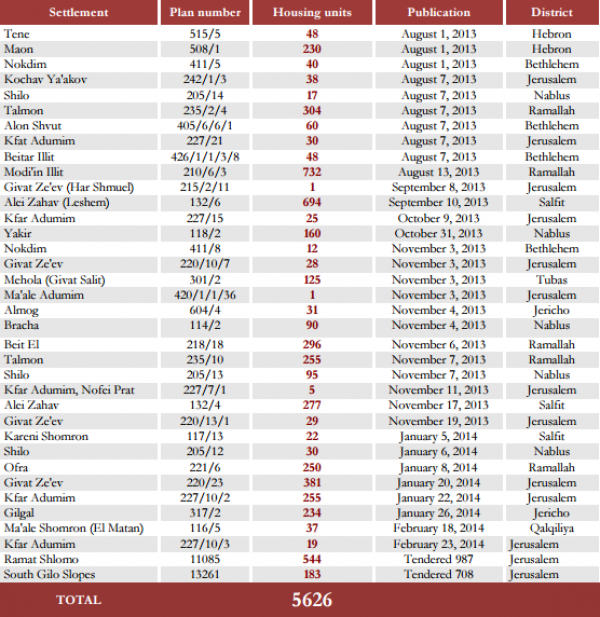 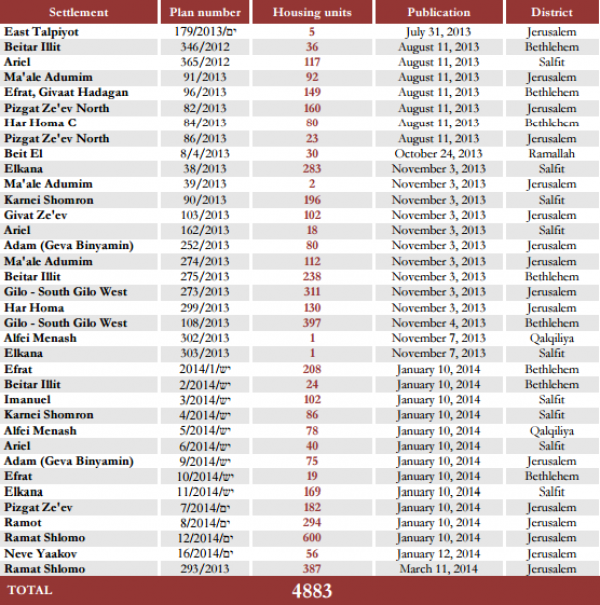