This report includes examples of recent inciting statements made by top Israeli officials on the theft of Palestinian money, the threat of forcible transfer facing the Palestinian Bedouin village of Khan al-Ahmar, the peaceful Great Return March protestors and the ongoing Israeli assault on Gaza.

I. On the Theft of Palestinian Money:

“We promised to stop the celebration of paying salaries for the terrorists and we did. Now it's final. Every shekel Abu Mazen pays for terrorists and killers will be automatically deducted from the Palestinian Authority's budget. An effective war on terrorism also passes through the pocket of terrorists, their families and Abu Mazen.”

“Congratulations for the passing of the law that deducts terrorists' money! After a long struggle between me and my colleagues, the government corrects a historical error: it fights terror instead of supporting it and stops the transfer of funds to the Palestinian terror authority. The next stage: the elimination of the kite terror, the elimination of Hamas regime and the return of our sons - Goldin, Shaul and Mangisto - home."

II. On the Threat of Forcible Transfer Facing the Palestinian Bedouin Village of Khan al-Ahmar:

“Hello, Mr. Prime Minister. You did well to instruct the Director General of the Foreign Ministry to rebuke the European Union. Now it would be good if you also instruct the Civil Administration to finally carry out the demolition in Khan al Ahmar and prevent the European’s intervention in practice, and not only by reprimanding them. Thanks in advance.” 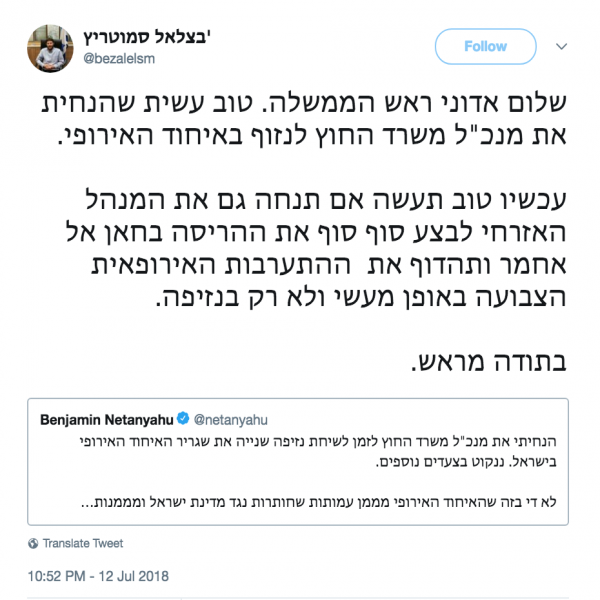 III. On the Protests of the Great Return March and the Ongoing Israeli Assault on Gaza:

“Also tonight, I am in favor of disproportionately escalating the reactions against Hamas. Disconnect electricity and the Internet, eliminate more or less senior officials, and bombard them to cause huge damage. But even tonight it is clear to me that this is not what will solve the problem. Only a renewed occupation of the Gaza Strip and the establishment of a magnificent settlement will bring quiet and security to the south.”

“Once again….it turns out that in our neighborhood, anyone who shows that he is afraid of a confrontation brings upon himself this confrontation. And even now it is forbidden in any form to raid the Gaza Strip if the objective of this operation won’t be a full re-occupation of the Gaza Strip and a return to the days before Oslo. Till then, to wage air strikes against them until they beg us for a cease-fire and pay for it.”

“Since the first day of the terrorists kites phenomena, I asked to shoot them directly. And I support the closing of Karm Abu Salem checkpoint, and every step that ties Hamas more. Further I agree on burning fields in Gaza as a response to the terror of the kites.”

MK and the Chairman of the Foreign Affairs Committee, Avi Dichter, (Twitter, July 15, 2018)

“The weekend terror events should get to its end without any fire - neither rockets nor kites. It will stop, and it will. And if this will be violated, the blood of those shooting and burning, those terrorists and their commanders, is permitted. A Gazan terrorist who does not understand this - will meet the IDF's firepower.”

“The moral order: to destroy the group of firefighters…

Jewish morality determines that our lives must be preserved above all: "Rise up and kill you”…When the fire broke out a few months ago, I said that the fire squads should be fired at and destroyed, and thus "extinguish" this terror when it is still small…There are arguments here and there, and any security-operational position is legitimate…I only say that I believed that a determined and powerful action immediately in the first few seconds would close the event even when it was small, but to be fair I must say that we will never know whether I was right…

Those who join terrorists who fire balloons intended to burn our citizens and our country are terrorists themselves…There is no need to wait for someone to die to justify, morally, the killing of the initiating enemy…There is nothing noble or moral about it…”

IV. On the Death Penalty Law

“Finally, the death penalty law for terrorists is coming up to a verdict. I'm sure my fellow ministers realize that we need all means in the war on terror. A terrorist that slaughters a family should not go home. There is no reason to be more enlightened than the United States and Japan in the war on terror.”

V. On the Jewish Nation-State Law

“The State of Israel was never, and is not and will never be a bilingual state or a state with two capitals, it is the one and the sole national state for the Jewish people, its official language is Hebrew and its capital is united Jerusalem”

“For years I have been saying that among the Arabs, terror is part of their culture- the Left's Pavlovian reaction is that it is racism. But the truth is that racism is rooted in the Left, who think that the Arabs are so inferior that they should not take seriously what they say …We take them seriously and therefore treat them like they are - murderers.” 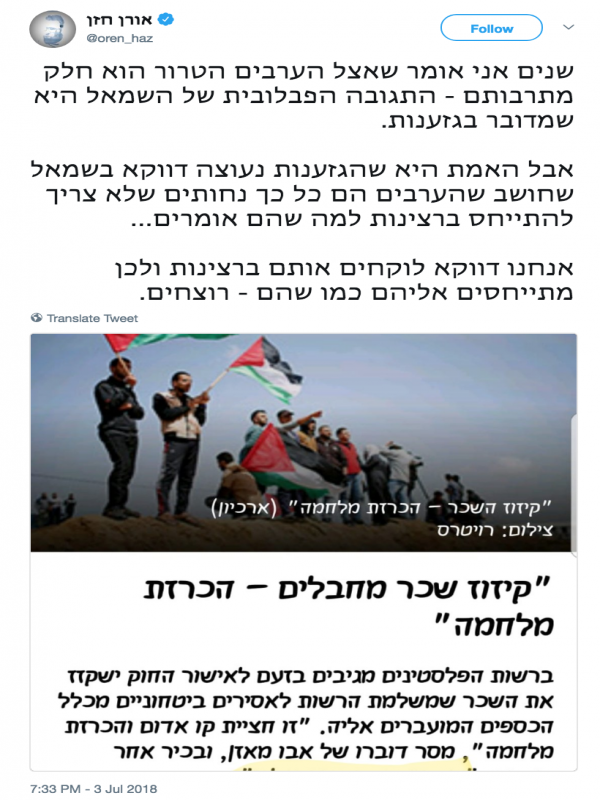