As the Israeli elections race intensifies, Israeli officials and political parties have competed in their incitement and hate speech against the people of Palestine. This report includes examples of recent inciting statements against Palestinian prisoners, martyrs, and their families, the indigenous Palestinian citizens of Israel, and against the President of the State of Palestine and the Palestinian leadership.

I. Palestinian Prisoners and Martyrs and their Families

“…it is time to kill terrorists and demolish their homes, and open the doors of hell for the environment supporting them…”

“We will apprehend them just as we have apprehended all of the recent assailants. We will demolish their homes; I already gave orders this morning to do so.”

“There are always actions that we are taking against the families and clans of these murderers. We did so yesterday and we will continue to do so...”

“I call for reconquering Gaza and dismantling all the armed forces. To open the door for immigration, and we can do that in cooperation with other countries and Europe. This is part of my broader vision; to prevent the establishment of any Arab entity between the river and the sea.”

“To turn Gaza into Jaffa, not as a colonial entity, but to ensure Israel’s full sovereignty over it, and to displace its people voluntarily through a policy of “encouraging voluntary immigration, and give financial assistance for each individual who is willing to immigrate, but whoever insists to stay then he must swear the loyalty oath to the state of Israel.”

“The undetonated rocket fired by genocidal animals [a reference made repeatedly by MK Cohen] was lying on the floor of my sons bedroom #Gaza #Palestine .”

“Gaza rocket fire hits house north of Tel Aviv - CNN - F.U. #Gaza. We are about to turn your lives upside down. If I were you I would get on a boat and flee to Europe! #Palestine #Hamas.”

“…..striking our children won’t pass without bombing Gaza back, the blood of the Jewish children is not permissible.”

“…we must return to the understandings of Operations Case Lead…we must show Hamas our powerful deterrence….let us not forget that our army killed 250 Hamas terrorists in demonstrations along the fence."

“At a conference to support the residents of Ashkelon, I addressed three strong blows to deliver to Hamas… destroying forty buildings for every missile fired towards Israeli territory..”

“My colleagues and I destroyed Shuja’iya known neighborhood, if we have done so in one day, we would have saved the lives of our soldiers…in dealing with Hamas we have to work more persistently, we have to return to assassinations and liquidations...to destroy buildings and headquarters.”

“If I was the Prime minister, I would have responded very fiercely at each site which poses danger…occupying Gaza is a possibility that must remain open…” 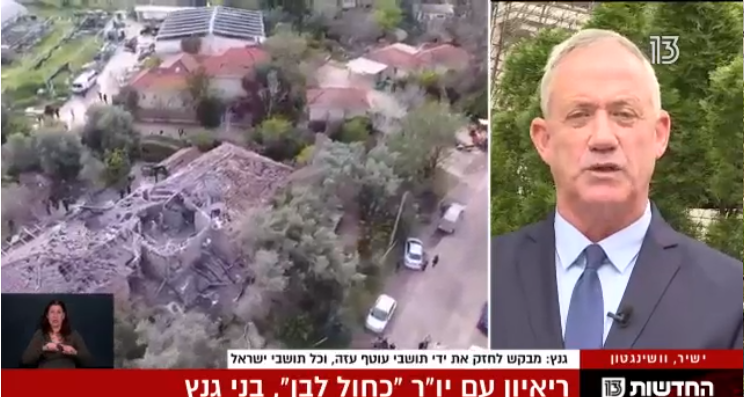 “…..Why don’t they open fire at terrorists? Because someone said that we cannot open fire towards the launchers of kites. I demand to kill them…”

“Defense Minister Netanyahu: This is the Gaza border right now.

Contempt. Imagine that this is the Russian border, what would Putin do. The blood of the south residents is not permissible. Terrorists? They must be eliminated.” 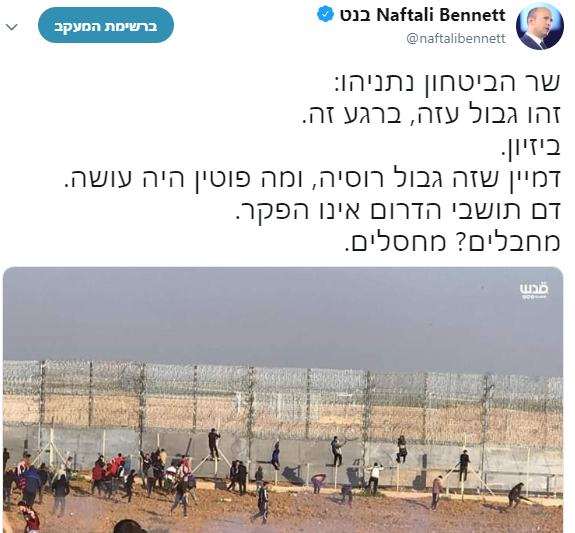 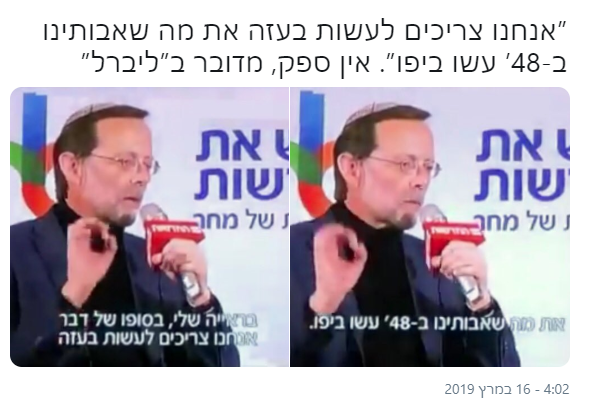 “If they will attack us, our policy will be rigorous, and when needed we will return to the assassination policy, Hamas understands what we are saying…during the last three and a half years following the Operation Protective Edge in 2014, there was absolute calm, neither kites nor balloons or rockets…we will change this slow policy and will activate a rigorous one…”

“…deterrence is achieved through force, only force. The small cabinet, where the three of us were present, has achieved deterrence for three and a half years, we are the ones who will restore this deterrence.”

“Today, it is very important as well to remember that by virtue of the Supreme Court , there are still supporters for Hamas in the Knesset. Ahmad Al-Tibi is one of them. He is wasting his time, he has no chance. The state of Israel was and will remain a Jewish state , it won’t be long that he and his supporters will need to choose between loyalty to the Jewish state and relocating themselves to one of the Arab neighboring countries.”

Allegedly Jamal Zahalqa: The goal was to go to Gaza?

JZ: The state must thank us. You took our land. You dismissed our people

OH: We did not take anything

JZ: I don’t want to serve the state

OH: Hello, why did you enter here?

JZ: We live in a situation where the state is taking over our lands. I prefer to die rather than singing the Israeli anthem

OH Shoots Zahalqa and says: If you want to die, then die but don’t threaten 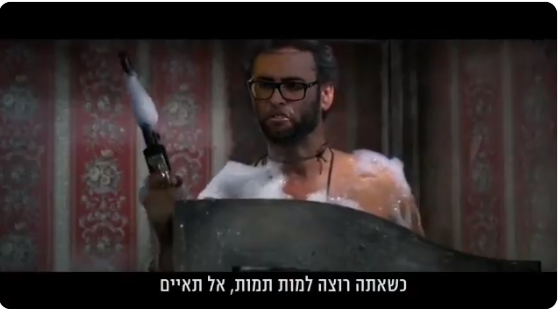 Allegedly Ahmad Al-Tibi : “The capital of Palestine is East Jerusalem. This is the bases for the two states solution. There is no other possibility to establish a Palestinian state without having Jerusalem as its capital. Al-Aqsa Mosque compound is the mosque for Muslims, I am also a Muslim, so this is my house, this is my mosque and I will enter to it whenever I want, and I warn you not to harm Al-Aqsa mosque compound.”

Moshe Feiglin: “The Temple Mount is the heart of Jerusalem, and Jerusalem is the heart of the state of Israel…when missiles fall in the south, this is because of the flexibility practiced in the Temple Mount..when the sovereignty returns to the Temple Mount, when there is no question over our right to pray in the mount, when the mount will return not only to our hands but to our hearts as well, the whole land will be ours.” “We won’t give up any inch of our land, it’s all ours. The Jewish people were the only people in this land..we will impose sovereignty from the river to the sea.”

Feiglin then hits Al-Tibi with his sword 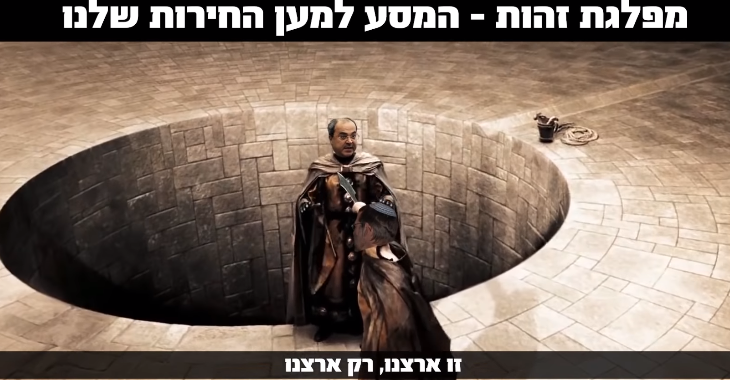 “This is absurd; the Supreme Court interferes in the decision of the Central Elections Committee and allows the enemies of Israel to run the elections, this must stop. In the next Knesset, I will submit a bill that would prevent the interference of the Supreme Court in the decisions of the Central Elections Committee. We will do everything possible to enact the law and prevent the fifth column from sitting in the Knesset.

“Those who say that the chief of staff is a war criminal and that the state of Israel is carrying out ethnic cleansing in the Gaza Strip must not sit in the Knesset. He, and the other terrorists in the Knesset, must be in Hamas parliament in Gaza or in the Iranian Council…”

“The Likud proposal is approved to prevent Balad Party from running Knesset Elections. Those who support terrorism will not be in the Israeli Knesset.”

“…whoever is praising martyrs and using terms such as “occupied Jerusalem” cannot continue and keep her job in any government office in the state of Israel...”

“…Waqf [Islamic Endowment Authority] is responsible as they show weakness and failure by allowing the people to demonstrate. There is also the Palestinian Authority and Abu Mazen who are seeking to expand their control over the Dome of the Rock and they brought in their own people there. Abu Mazen does not stop telling lies, incites the people against the Israeli legitimate presence in the Dome of the Rock.

We will do everything possible to impose our sovereignty on the Dome of the Rock. It was not by coincidence that we ousted the terror groups “Murabiteen and Murabitat” [Palestinian Muslim Worshippers who devoted themselves to guard Al-Aqsa Mosque Compound] who are affiliated with Islamic movement in the north, following this step the Jewish visits to the temple mount increased.”

“…In a normal situation, the whole town [Abbouin village northwest of Ramallah] should be banished immediately, but I hope that our soldiers will at least remove this shame tonight."

“Shoot him, this is self-defense. They are tying the hands of our soldiers, we are coming to change.” 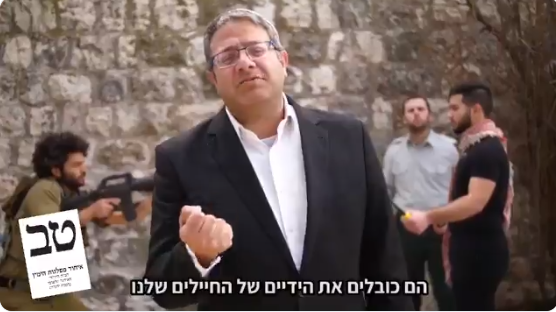 “The Terrorists’ Rights Council, called for some reason the UN Human Rights Council, is currently passing series of resolutions against Israel without any word about Hamas, Hezbollah or Iran. A group of hypocrites.”