Bethlehem is the southern gateway to Jerusalem. Passing through the Nativity Church, its geography extends from the Dead Sea's shores and the Monasteries of the surrounding desert towards the fertile lands with roman-made irrigation systems of Battir. The historical, cultural, and religious significance of Bethlehem goes beyond the borders of Palestine. With almost 4,000 years of uninterrupted human presence, the birthplace of Jesus is sacred to billions of faithful worldwide.

There are 18 illegal Israeli colonial-settlements built on lands belonging to Bethlehem Governorate and surrounding the city of Bethlehem from all sides – including the annexation wall, checkpoints, and other movement restrictions. Israel, the occupying power, controls over 87% of the land[1] for the benefit of its ongoing annexation process, a crime of aggression under the Rome Statute.

This brief summarizes Israel's annexation plans during 2020 that have been decisively advanced even under the global COVID-19 Pandemic.

The illegal colonial-settlement of Giv'at Hamatos is located right across the Mar Elias Monastery, one of the most important religious shrines in Palestine and today separated, by the annexation wall, from its Bethlehem community. It is also the traditional first stop of the Jerusalem patriarch on the way to the Nativity Church, where the authorities of Beit Jala receive him in accordance with the Status Quo agreement as well as its related protocol[2]. Recent colonial-settlement approvals are turning this historic Monastery into an island surrounded by Israeli settlements. In the 1990s, the construction of the illegal colonial-settlement of Har Homa viciously altered the landscape close to the biblical site of the "Shepherds Field" in Beit Sahour by destroying a forested mountain that still contains the Saint Theodore's Well, ruins of a Byzantine Monastery, and of a church which marks where "Sr. Mary dismounted before giving birth to Jesus."[3]

The "Peace to Prosperity" Plan: A Green Light for Annexation

On 28 January 2020, the Trump administration published a plan called "Peace to Prosperity," which aimed to deny the existence of the Israeli occupation, normalizing all illegal colonial-settlements and the further annexation of vast parts of occupied Palestinian lands. In the case of Bethlehem, this included all its western (Al-Makhrour) and northern parts. A group of Bethlehem-based clergy from various Christian denominations emphasized in a letter to members of the diplomatic community that "In practice, annexation could be the final straw when it comes to a viable Christian presence in Palestine, as well as the national aspirations to live in freedom, independence, dignity and equality in our homeland in accordance with international law."[4]

The Advancement of New Israeli Colonial-Settlement Units in 2020

Thousands of illegal colonial-settlement units were advanced (in different stages) in Bethlehem Governorate. The vast majority of the approvals happened during the second half of 2020, after the signing of Israel's normalization deals with the UAE, Bahrain, and Sudan, when it was claimed that Israel would stop the annexation of further territory belonging to the State of Palestine.

Among the approvals are[5]:

"Giv'at Hamatos": Consolidating the Separation of Bethlehem from Jerusalem

The approval of over 1,200 units for the illegal colonial-settlement of Giv'at Hamatos represents another Israeli attempt at isolating and cutting-off the historic cities of Bethlehem and Jerusalem from one another, despite them being located only 10 kilometers apart. From Israel's unilateral expansion of the borders of its Jerusalem Municipality (rejected by UNSC Resolution 476[6]) to the Trump Plan, several government-backed colonial projects have aimed to achieve this objective. This includes the ongoing expansion of the illegal colonial-settlements of Gilo and Har Homa[7]. Giv'at Hamatos links both settlements creating a "bloc" that perpetuates Bethlehem's separation from Jerusalem without the need to construct an additional section of Israel's illegal annexation wall.

While all Israeli colonial-settlements are illegal under international law, Israel prohibits specific colonial installations under its law. As part of the ongoing process of annexation, the Israeli government "legalized" the illegal colonial installation of Pnei Kedem[8], south-east of Bethlehem city. In 2019, another colonial-settlement installation was established in Al Makhrour, part of the World Heritage Site of Battir[9], with support from the Jewish National Fund[10].

The Creation of a "Public Park"

In July 2020, the Israeli Occupying Forces declared several hundred dunums of Palestinian land to be a "Public Park,"[11] fencing the Herodion Mountain[12], one of Palestine's most important archeological places.

Expansion of Bypass Roads for the Benefit of Israeli Settlers

During 2020, the Israeli occupation advanced plans to expand a bypass road, including tunnels and a bridge, over the Cremisan Valley and Al Makhrour along Road 60 that connects Israeli settlers in the southern West Bank with Jerusalem.

The latest Israeli settlement announcements in Bethlehem, if not canceled, represent a death blow not only against the prospects of a negotiated solution but against Bethlehem's identity, viability, present, and future. Israel's denial of Palestine's potential with its ongoing annexation process is not only illegal but represents a daily threat to the rich cultural heritage of the people of Palestine and the entire region, which Israel utterly disregards to benefit its illegal colonial-settlement enterprise.

[2] The presence of the representatives of Beit Jala, most notably the mayor and parish priest, represents a demonstration that this land has been traditionally linked to Bethlehem. The participation of Bethlehem-based representatives in such historic celebrations today is conditioned to the issuance of Israeli military-permits. For more information on the Status Quo Agreement please go to The Historic “Status Quo” Agreement in Jerusalem and the Israeli Occupation - in Light of Israel's Attempt to Impose Municipal Taxes on Church Property | NAD last accessed on December 2, 2020.

[6] “Reconfirms that all legislative and administrative measures and actions taken by Israel, the occupying Power, which purport to alter the character and status of the Holy City of Jerusalem have no legal validity and constitute a flagrant violation of the Fourth Geneva Convention relative to the Protection of Civilian Persons in Time of War and also constitute a serious obstruction to achieving a comprehensive, just and lasting peace in the Middle East” available at S/RES/476 (1980) of 30 June 1980 last accessed on November 30, 2020.

[7] Israel’s PM Benjamin Netanyahu confirmed in 2015 that the construction of the illegal colonial-settlement of Har Homa was a “way of stopping Bethlehem from moving toward Jerusalem” available at Netanyahu: No Palestinian state on my watch | The Times of Israel last accessed on November 30, 2020. 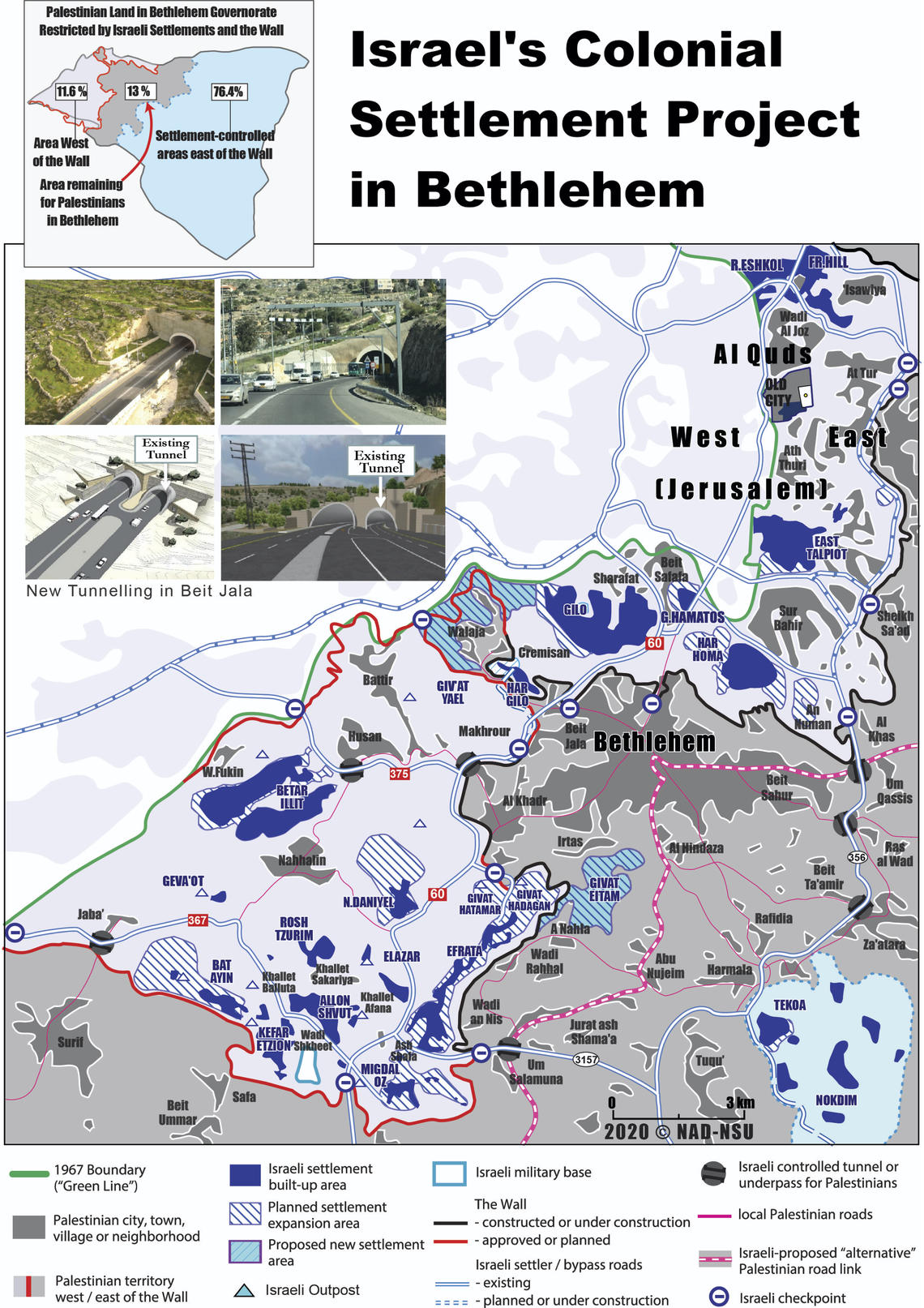