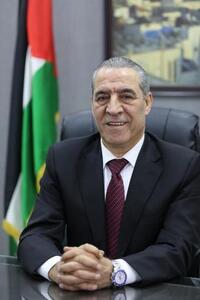 Hussein Al Sheikh was born in 1960 in Ramallah, Palestine, to refugee parents. He has held the position of Secretary General of the Executive Committee of the Palestine Liberation Organization since May 2022, after being elected member of the Executive Committee and head of the Negotiations Affairs Department in February 2022. Al Sheikh has been the Head of the General Authority of Civil Affairs since 2007. He is also a member in the Palestinian National Dialogue and Reconciliation Committee, and he chairs the Palestinian side in the Tripartite Committee for the Reconstruction of Gaza.

Minister Al Sheikh was elected member of the Fatah Central Committee for two consecutive terms: the first since 2009-2016, and the second from 2016 to date. He is an official spokesman for the movement and acted as Fatah's Secretary in the West Bank in 1999. Prior, Minister Al Sheikh was a political prisoner detained in Israeli prisons for 11 years, between 1978 and 1989.

In his quest to end the Israeli occupation and establish an independent state of Palestine, Minister  Al Sheikh has participated in various regional and international conferences, aiming to revive the peace process and gain international recognition of the State of Palestine. In 2012 he earned the title “Best Palestinian Public Figure” in opinion polls.

Through his work as the Head of the General Authority of Civil Affairs, and by leading the negotiations with the Israeli side, Minister Al Sheikh resolved various  issues, to facilitate the daily life of the Palestinian people. Among the top achievements was recovering hundreds of the bodies of Palestinian martyrs held by the Israeli Occupation Government, in the so-called "Cemetery of Numbers “, and the establishment of the Palestinians' right to freedom of movement and residence through the issuance of tens of thousands of ID cards under the Family Reunification file. Minister Al Sheikh also pushed forward the agreements of the joint Palestinian crossings with bordering  countries.

In his capacity, Minister  Al Sheikh has contributed to improving the economy within the State of Palestine by facilitating the entry of foreign investors and Palestinians from abroad, who do not hold Palestinian citizenship.

- Head of the Negotiations Affairs Department

2017: Member of the Palestinian National Dialogue Committee on the reconciliation file

– present: Head of the General Authority of Civil Affairs

- Head of the Civil Affairs Coordination and cooperation  Committee (CAC)

1999 : Secretary General of Fatah in the West Bank

1994: Colonel in the Preventive Security Division

1993: Participated in establishing the political committees in the West Bank and Gaza Strip post Oslo Accords

1988: Member of the Unified National Command of the First Intifada

Tweets by @nadplo
Back to top