The Barrier to Peace

The Barrier to Peace 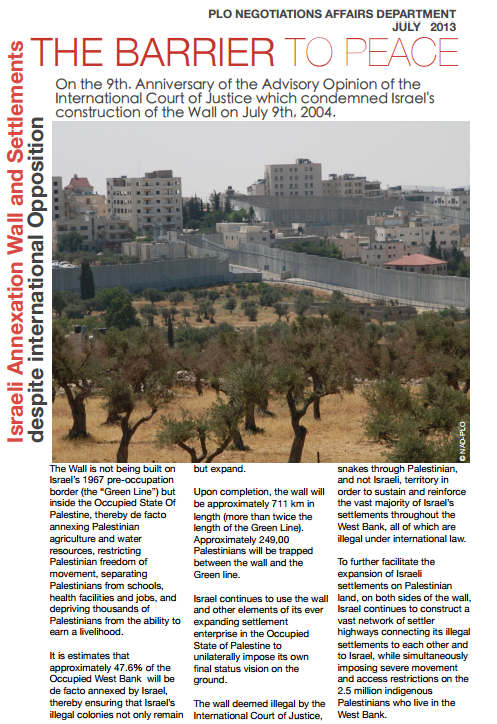 It is estimates that approximately 47.6% of the Occupied West Bank will be de facto annexed by Israel, thereby ensuring that Israel’s illegal colonies not only remain but expand.

Upon completion, the wall will be approximately 711 km in length (more than twice the length of the Green Line). Approximately 249,00 Palestinians will be trapped between the wall and the Green line.

Israel continues to use the wall and other elements of its ever expanding settlement enterprise in the Occupied State of Palestine to unilaterally impose its own final status vision on the ground.

The wall deemed illegal by the International Court of Justice, snakes through Palestinian, and not Israeli, territory in order to sustain and reinforce the vast majority of Israel’s settlements throughout the West Bank, all of which are illegal under international law.

To further facilitate the expansion of Israeli settlements on Palestinian land, on both sides of the wall, Israel continues to construct a vast network of settler highways connecting its illegal settlements to each other and to Israel, while simultaneously imposing severe movement and access restrictions on the 2.5 million indigenous Palestinians who live in the West Bank.