The Carving of East Jerusalem into Segregated Bantustans: The Case of Sur Bahir

The Carving of East Jerusalem into Segregated Bantustans: The Case of Sur Bahir 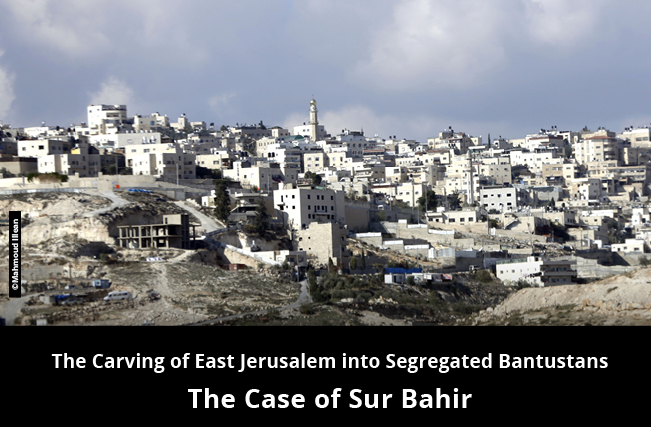 To alter the Palestinian and Arab character of East Jerusalem, Israel, the occupying power, has been using a wide range of unlawful policies and practices aimed at reducing Palestinian presence and increasing its colonial-settler population in the city. This includes allocating a mere 13% of the city’s land for Palestinian construction in comparison to 35% for the construction of Israeli settlements. In parallel, Israel employs a discriminatory planning and permit system and corresponding policy of home demolitions to forcibly displace the native Palestinian population to accommodate the transfer of Israel’s civilian population to occupied Palestine. Such transfer constitutes a grave breach of the Fourth Geneva Convention and a war crime under the Rome Statute.

The case of Sur Bahir illustrates how Israel’s colonial-settlement enterprise, and associated policies such as home demolitions, has served to carve occupied East Jerusalem into segregated Bantustans, reflecting an Israeli system of apartheid imposed on both the land and the people.