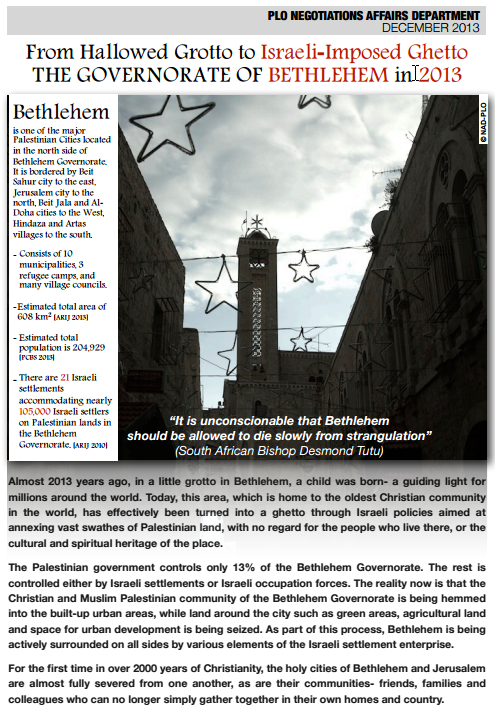 Bethlehem is one of the major Palestinian Cities located in the north side of Bethlehem Governorate. It is bordered by Beit Sahur city to the east, Jerusalem city to the north, Beit Jala and AlDoha cities to the West, Hindaza and Artas villages to the south.

Almost 2013 years ago, in a little grotto in Bethlehem, a child was born- a guiding light for millions around the world. Today, this area, which is home to the oldest Christian community in the world, has effectively been turned into a ghetto through Israeli policies aimed at annexing vast swathes of Palestinian land, with no regard for the people who live there, or the cultural and spiritual heritage of the place.

The Palestinian government controls only 13% of the Bethlehem Governorate. The rest is controlled either by Israeli settlements or Israeli occupation forces. The reality now is that the Christian and Muslim Palestinian community of the Bethlehem Governorate is being hemmed into the built-up urban areas, while land around the city such as green areas, agricultural land and space for urban development is being seized. As part of this process, Bethlehem is being actively surrounded on all sides by various elements of the Israeli settlement enterprise.

For the first time in over 2000 years of Christianity, the holy cities of Bethlehem and Jerusalem are almost fully severed from one another, as are their communities- friends, families and colleagues who can no longer simply gather together in their own homes and country.