The Settlement of Gilo: An Internationally Recognized War Crime

The Settlement of Gilo: An Internationally Recognized War Crime 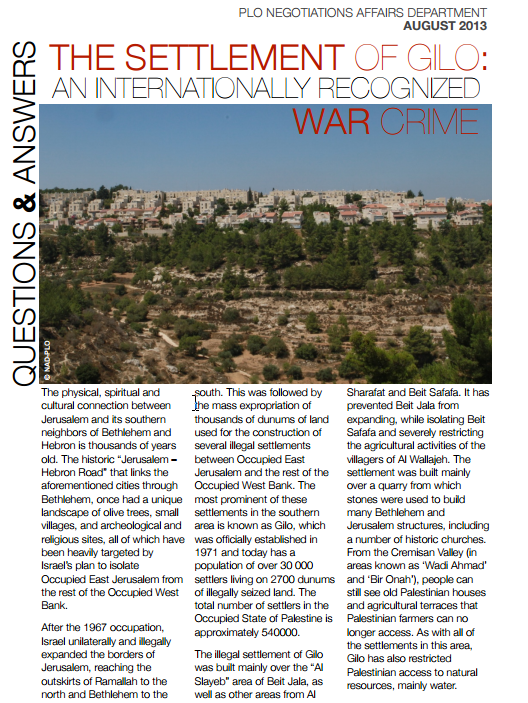 The physical, spiritual and cultural connection between Jerusalem and its southern neighbors of Bethlehem and Hebron is thousands of years old. The historic “Jerusalem – Hebron Road” that links the aforementioned cities through Bethlehem, once had a unique landscape of olive trees, small villages, and archeological and religious sites, all of which have been heavily targeted by Israel’s plan to isolate Occupied East Jerusalem from the rest of the Occupied West Bank.

After the 1967 occupation, Israel unilaterally and illegally expanded the borders of Jerusalem, reaching the outskirts of Ramallah to the north and Bethlehem to the south. This was followed by the mass expropriation of thousands of dunums of land used for the construction of several illegal settlements between Occupied East Jerusalem and the rest of the Occupied West Bank. The most prominent of these settlements in the southern area is known as Gilo, which was officially established in 1971 and today has a population of over 30 000 settlers living on 2700 dunums of illegally seized land. The total number of settlers in the Occupied State of Palestine is approximately 540000.

The illegal settlement of Gilo was built mainly over the “Al Slayeb” area of Beit Jala, as well as other areas from Al Sharafat and Beit Safafa. It has prevented Beit Jala from expanding, while isolating Beit Safafa and severely restricting the agricultural activities of the villagers of Al Wallajeh. The settlement was built mainly over a quarry from which stones were used to build many Bethlehem and Jerusalem structures, including a number of historic churches. From the Cremisan Valley (in areas known as ‘Wadi Ahmad’ and ‘Bir Onah’), people can still see old Palestinian houses and agricultural terraces that Palestinian farmers can no longer access. As with all of the settlements in this area, Gilo has also restricted Palestinian access to natural resources, mainly water.