Altering The Character Of Jerusalem

Altering The Character Of Jerusalem 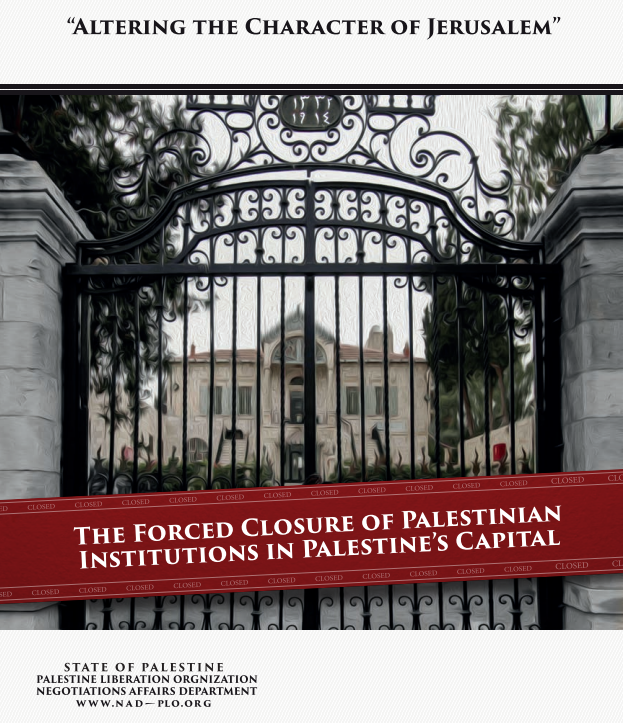 Jerusalem has always been the political, administrative and spiritual heart of Palestine due to its history, geographic centrality, commercial vitality and wealth of religious and cultural heritage sites.
Over the centuries, several institutions have been created in Jerusalem. During the period of Ottoman rule, a growing number of institutions resulted in the establishment of the Jerusalem Municipality in 1863. Thirty successive mayors led the city, from Mr. Musa al-Alami to Mr. Rouhi al-Khatib, who was in office when Israel occupied East Jerusalem in 1967. After Israel’s conquest of what came to be known as ‘West Jerusalem’ in 1948, several Palestinian institutions were forced to move their offices from the western part of the city towards East Jerusalem. After Israel’s occupation of the rest of the city in 1967, several institutions were forced to immediately close.
Only weeks later, Israel unilaterally expanded the municipal borders of Jerusalem from 6.5km2 to 72km2, enlarging East Jerusalem by more than ten times. Israel then applied its own laws, administration and jurisdiction over the newly expanded area of municipal Jerusalem. Since that time, Israel has imposed a number of policies and practices aimed at Judaizing the city and annexing it once and for all. These policies and practices are contrary to international law, severely detrimental to the prospects of a two-state solution with East Jerusalem as Palestine’s capital, and are causing immense damage to Jerusalem’s Arab-Palestinian identity and its significance as the home of the three major monotheistic faiths.