I.  Palestinian Prisoners and Martyrs and their Families

“…it is only a punitive step among a series of steps that would restore our deterrence in confronting the despicable terrorists. We must demolish their homes and expel their family members, the terrorists must rotten in jail for the rest of their lives.”

“Terrorists’ families should be expelled to Gaza, which is part of the Palestinian entity! I recall that Rabin, the late Prime minister, expelled Hamas leaders to Lebanon- to another country! This would deter terrorists and the family will be a restraining mechanism. Also we should work on fully blocking the visits of prisoners’ families from Gaza, until the two civilians and the dead bodies are released by Hamas.”

The Office of the Prime Minister of Israel  (PMO/Website, 13 December)

“*Accelerated demolition of terrorists' homes (to start within 48 hours);

*Continued efforts to apprehend the murderers and dismantle the infrastructures from which they set out;

*Increased administrative detention of Hamas militants in Judea and Samaria;

*Reinforcement of IDF units in Judea and Samaria;

*Reinforcement of protection along roads and placement of checkpoints on roads in Judea and Samaria; and

*Placing a cordon around El-Bireh and revoking permits of family members of terrorists and their accomplices.”

“It was approved in the first reading: terrorists won’t be able to get a shortening of their sentences. The Knesset approved in the first reading my bill to prevent a shortening of sentences of those political prisoners’ by a third. The war on terrorism is taking place on all fronts, I say no for terrorists’ rehabilitation, they are not supposed to be granted privileges and certainly we should not shorten their sentences.”

“The basic problem is that the terrorists’ equation is: that one should be a terrorist. If you kill Jews, they will not demolish your house, and if you wound others – we don’t even ask for the destruction of the house. This is the policy that prevails these days. I call upon the Prime minister and the defense minister to change it.”

“Palestinian terrorists whether affiliated with Hamas or Fateh have no feelings or ethical constraints, the main issue for them is to kill Jews, and they don’t care if the woman is pregnant or if he is a child…”

“I welcome the decision of demolishing the terrorist’s home. The demolition of homes is justified, a deterrent that is needed in reality.”

“Just a week ago, 15 million dollars were transferred to Hamas, in a second payment out of 10, under the sponsorship of Israel. Those who pay terrorists don’t just satisfy their appetite on the contrary increase it. The government must retract its surrendering to Hamas and stop the flow of Qatari fuel and the transfer of monthly salaries paid to terrorists in Gaza.”

Against Raja Za’atreh former deputy mayor of Haifa inside Israel: “Za’atreh, whose positions are close to Basel Ghattas and Azmi Bishara, both Christian MKs who supported terrorists while they were members of the Knesset…”

“Raja Zaatreh’s place should be the jail, not as a deputy mayor. The amendment to the law will give the interior ministry the authority to cancel the appointment of a deputy mayor who expresses public support to terror organizations which call for the destruction of the state of Israel. It is our duty to remove this disgrace from the people of Israel, this is a shame. I cannot believe that such an issue would happen in any country in the world.”

“... The Palestinian Authority proves once again that it is the main instigator of terror. The people of Israel have passed difficult times, but they came out of it stronger, and we are committed to act vigorously against our enemies.”

“…and yet the Palestinian Prime Minister praises the terrorists as “righteous martyrs.” Peace partner?”

“Mr. Ambassador, with all respect, the Palestinian Authority is a terrorist organization. Every attempt to build a political solution to improve the situation will end up in a bloodbath. The only way to peace is having Israel’s control over the political, security and humanitarian aspects of Judea and Samaria [Occupied West Bank], we will take care of the security and lives of the residents of Judea and Samaria , Jews and Arabs alike.” 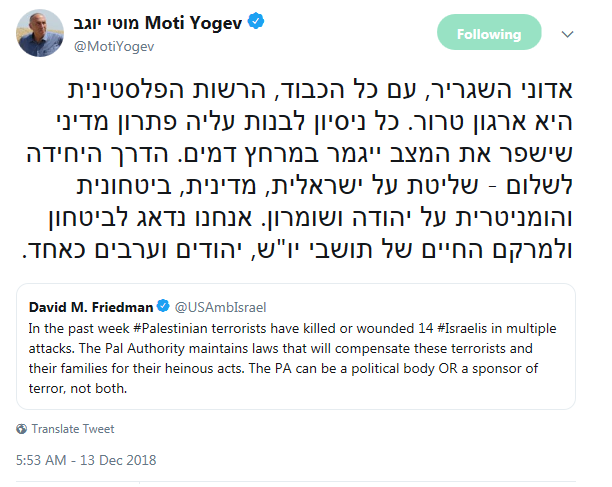 “The late terror incidents in Judea and Samaria [Occupied West Bank] are very critical. They are the result of the incitement coming from the Palestinian Authority and the Gaza strip. I call upon the Palestinian leadership to raise a clear voice against incitement and the recent criminal acts. The time of the murderers is short, as this was proved by the Israeli defense and security forces last night.”

“Mahmoud Al-Aloul, the deputy chief of the terrorist Abu Mazen who is affiliated with Fateh organization, calls on the Palestinian people to be well prepared so that they can deal with the aggression carried out by “murderous settlers ”, I call for “believing” his words and finally eliminate him along with his chief, the old man terrorist, thereby cutting off the head of the snake.”

The Office of the Prime Minister of Israel (Twitter, 10 December)

“There are, of course, cries of joy; I think it is too much to expect a condemnation from the Palestinian Authority. They only contribute to incitement here.”

“I call upon the Prime Minister to rearrange the situation of Ofra community. The legal opinion draft is ready. In the face of Abu Mazen’s “price list of terror”, we set our own price list: every attack will strengthen the settlement instead of weakening it, and every potential terrorist will know in advance that strengthening settlement will be registered in his name.”

“…a Palestinian Authority which supports terrorism against women and children, it does not deserve to receive money used to consolidate terrorism.”

VI. The United Nations and the European Union

“Instead of outrage, the EU reacts to the murder of innocent Israelis by Palestinians by saying “terrorism and violence are never a solution.” Would the EU say that about Strasbourg attack? Distinguishing between Israeli and European victims of terror is the definition of anti-Semitism.”

“The UN refuses to condemn Hamas which praised the shooting of six Israeli civilians, including a pregnant woman, calling it “heroic.” All moral countries must condemn the UN and stop funding its defense of terror.”

“Share to reveal the truth! Today the world celebrates Human Rights Day, so instead of attacking us, it is better for them to recognize the cruelty of the Palestinian terrorist Organizations."

“The very definition of anti-Semitism: the UN that passed 700 resolutions condemning Israel won’t pass one condemning Hamas for attacking Israel. Thank you Ambassador Haley for again exposing the UN’s racism and standing up for moral truth.”

"The fact that the United Nations can’t even pass a resolution condemning a murderous terrorist organization like Hamas is proof of how hypocritical and irrelevant it has become. This vote will be remembered as a shameful low point in the history of the UN." 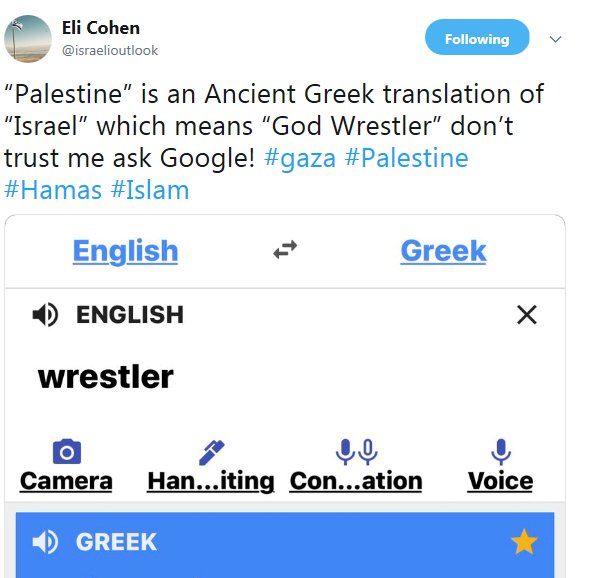 “#Ramallah has been always a symbol of development # and as Christmas is approaching it is clear that there are those who want to destroy the positive atmosphere. Do you choose to maintain this atmosphere quietly and joyfully? Or you prefer the path to # terrorism through # Hamas terror cell so that the people of the city would suffer the consequences of Hamas actions in addition to the campaign of chasing its members?”

“The demand of the community and the mayors in Judea and Samaria [Occupied West Bank] to provide them with security and consolidate settlements is absolutely justified. I came here to express my solidarity with you and I am certain that in the cabinet meeting, many solutions will be proposed. No doubt that one of the best answers to the terrorists’ attempts to expel us from Judea and Samaria is to deepen our roots and strengthen construction, and regulate the existing settlement.”