This report includes examples of recent inciting statements made by top Israeli officials to justify the theft of Palestinian money and against the cancellation of the soccer match between Argentina and Israel. It also highlights the continued incitement against the Palestinian protestors of the Great Return March in Gaza.

I. On the Theft of Palestinian Money

"I thank the Foreign Affairs and Security Committee for its unanimous approval of my proposal to deduct money from the Palestinian Authority, which also includes compensation funds for the damage caused by fires in the Gaza Strip area. Justice should be served and those who burn fields must know that there is a price for this.”

President of the Almagor Society, an Israeli association working to support the families of the killed Israelis, Meir Indor

"This is a historic step and an important achievement, and it must be a precedent to the achieving the death penalty, and we must not contribute to the transfer of funds to the saboteurs."

“Abu Mazen is the problem. While he prevents salaries of tens of thousands of officers in Gaza during the month of Ramadan and blocks any international attempt to provide money to ease the situation in Gaza, it pays NIS 100 million each month to terrorists and murderers. The bill that we have introduced and approved by the Foreign Affairs and Defense Committee is loud and clear. No more.”

II. On the Protests of the Great Return March

“It began with empty tunnel explosions from terrorists and continued to fire warning shots at the kite terrorists, so that no stinking Hamas would be killed. The absurd is already clear? Who feels pity for the cruel will end with his fields burnt! When will we understand this? As always, only after we have been paid with human life ...we must not wait – we must kill 20 terrorists’ kites in one day and the Yishuv will flourish again”

“If instead of firing warning shots on the infrastructure in order to remove terrorists, we would shoot at the kite terrorists themselves in order to destroy them - there simply would not be anyone left to threaten… Sooner or later we will have to deal with this type of terrorism, so the sooner is better before it’s too late.”

“I'm glad I was able to inspire the cabinet members in relation to the treatment of kite terrorism. There's nothing to do, on the other side we understand only power and eventually we are forced to use it-the disaster is already here and it is better to do this as soon as possible!”

Translation of the text in picture: Bennet:  “You have to shoot the kite launchers.” The Minister of Education calls for strengthening the condemnation of the balloons” 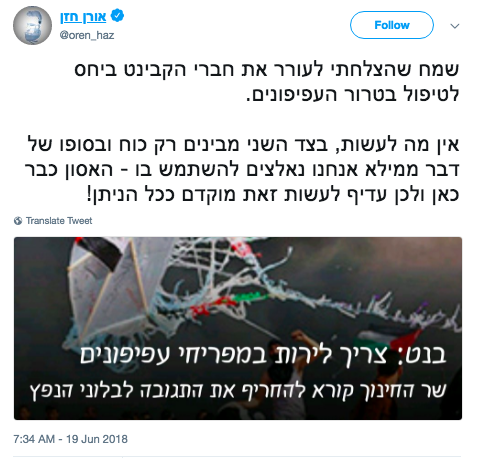 "Kick-off bombs are bombs. Tomorrow, at the cabinet meeting, I will try to find out why there are no targeted assassinations of terrorist kites. They are the same as any rocket launcher!”

“Those who are afraid of just another useless round facing Gaza will only postpone the next round. There is no choice but to reoccupy the Gaza Strip and return to the days before the foolishness of Oslo. Then my plan will be presented to the Gazans, like the rest of the Arabs in this country, with three options: the acceptance of our conditions, emigrate from the country or fight and loose, there is no other way.”

“I have engaged with Palestinians for many years, not all of them are evil or enemies of Israel, but what is hard to see is their cowardice, the cowardice in telling the truth.”

III. Against the Cancellation of the Soccer Match between Argentina and Israel

“Stop confusing your mind and lying to yourself, as if the game was cancelled because it was moved to Jerusalem. For Jibril Rajoub, Haifa is no less "occupied" territory than Jerusalem. The decision to move was good. What's not good is that we've been giving power to the terrorists in Rajoub’s style to run things here rather than taking their heads off.”

“Whoever threatened the players of Argentina, only for the sake of harming Israel, should be in prison and for sure not to enter Jerusalem whenever he wishes. Those who support kidnapping soldiers and incite attacks must be behind bars and not members of international organizations. Israel has the authority and the ability to investigate and prosecute Jibril Rajoub. Therefore, I approached the Attorney General and the Judge Advocate General this evening in order to approve the opening of an investigation against the "diplomat" Rajoub on suspicion of incitement to murder, and to prevent his entry to Israel. Share your post to echo the demand to investigate the Rajoub!” 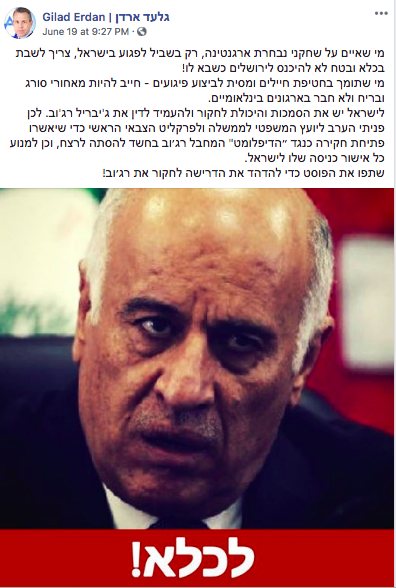 Today at the #GC4I2018 forum, I revealed the map of the Delegitimization Network- aka, the Hate Net. We've mapped out the 42 leading #BDS orgs, their hub in Ramallah & the connections between them. We're exposing their anti-Semitism & ties to terrorist groups like #Hamas & PFLP 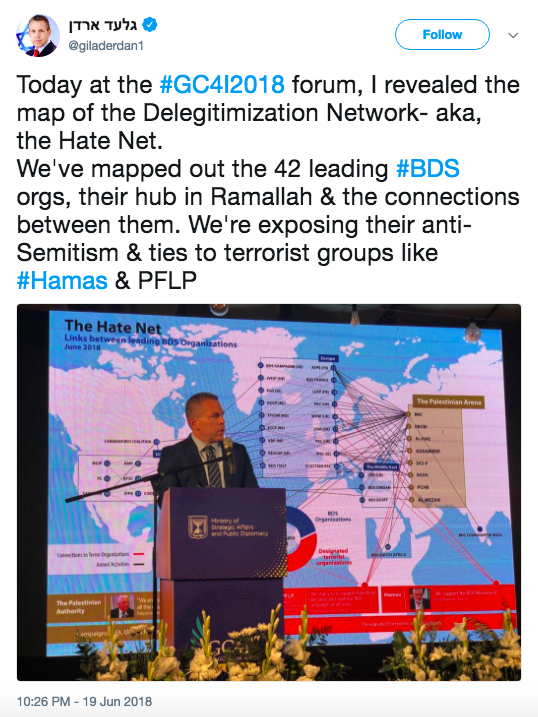 “Did you really think that Zuabi, the terrorist, who harms soldiers and police officers would even care about the handicapped sign?! You were laughing at that terrorist... On the other hand, she learns firsthand that our eyes are always on her until she flies to Gaza, to Syria or to the holy hell!”

“The terrorist Hanin Zoabi is in the Knesset and contributes to terrorism against the Israeli Army soldiers and citizens of Israel because the Knesset members from the Zionist camp, Yesh Atid (There is a Future) and the ultra-Orthodox parties refuse to sign MK Oded Forer's proposal to oust her by law. I ask you to enter the site and write to all the MKs. http://www.forer.org.il/hanin. “ 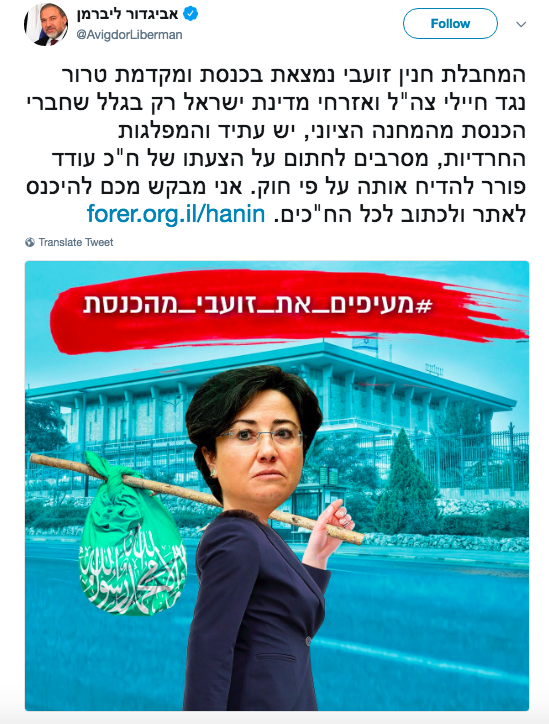 Far-right Jewish extremists chanted slogans against Ali Dawabsha (Baby Ali Dawabsha and his parents were burned alive and killed by Israeli settlers following the attack on their home on July 31, 2015), and the Palestinian crowd waiting outside the Israeli Central District Court in the city of Lod. (The Times of Israel, June 19, 2018)