This report includes examples of recent inciting statements made by top Israeli officials against the UNHRC, Palestinian President Mahmoud Abbas and the families of Palestinian prisoners and martyrs. It also highlights the continued incitement against the Palestinian protestors of the Great Return March in Gaza.

I. On the Protests of the Great Return March

"If Hamas starts to pay the price for what comes out of its territory, I believe that this phenomenon will stop, every terror is terrorism and its operatives and operators must be treated as terrorists"

“Anyone who builds and sends a kite with a Molotov cocktail, a camera or any other means intended to reach the territory of the State of Israel and cause damage here must be treated as a terrorist in the middle of an attack."

"We can't put all these people in jail, we are talking about hundreds of people that are attacking the fence."

“Alone the moments in the life of a nation like the moment in which the strongest power in the world recognizes our sovereignty over the Jerusalem nation. We are prepared in front of Hamas's threats to disrupt the festivities. I offer to the residents of Gaza: Don’t be blinded by Sinwar that sends your children to sacrifice their lives without a span. Protect our citizens by all means, and we will not allow the fence to cross.”

“I hear on the radio "Hard Day in the Gaza Strip"... Not sure where a sentence like this is coming from, the terrorists should be eliminated, whatever they are, and that is exactly what we are doing right now. And for this they deserve that the IDF soldiers will never March alone! And to be clear: Hamas is the one who sends his terrorists to death, so why is this so hard?”

Chairman of the Parliamentary Security and Foreign Affairs Committee, Avi Dichter (Facebook, May 14, 2018)

“If the demonstrators in Gaza continue to try to harm IDF soldiers and Israeli citizens, I am not worried. There are enough bullets for everyone.”

“It is not about demonstrators, but saboteurs of a terrorist organization that threaten the security of the citizens of Israel. There is no country that allows a terrorist organization to send terrorists to infiltrate its territory, and all responsibility for their blood lies with the Hamas leadership, which, inspired by Nazism, sheds blood to distract people from its failure to run the Strip.”

“Yesterday, tens of thousands of Israelis gathered in the Rabin Square for a music show. In Gaza, however, thousands gathered to infiltrate into Israel for terrorist acts. This is the difference between Israel's life culture and the death culture in Gaza.”

“Hamas can turn anything into a weapon of terror”. 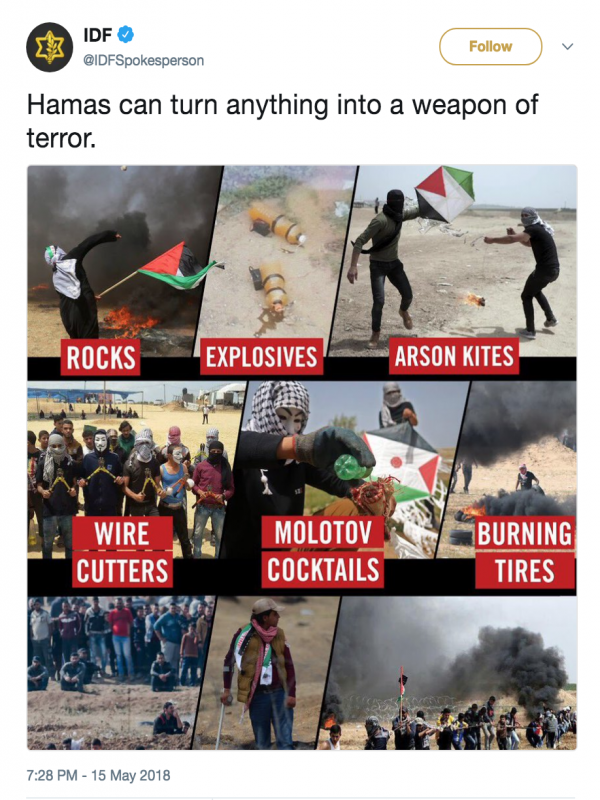 “The Hamas leadership is a group of cannibals that treats children and women as weapons. They want to lift the siege on Gaza, but they do not do so for the economic distress of the Palestinians or for the sake of coexistence."

“At the end of this long and hot week, we think with great love, thanks and gratitude for the brave and heroic soldiers who protect us every day and during weather. Dear soldiers, as you protect us from Hamas terrorism, we will protect you against the high-end investigative committees and the painted gangs that work against Israel. The people of Israel loves you.”

II. On the Adoption of UNHRC Resolution A/HRC/S-28/L.1

“PM Netanyahu: There is nothing new under the sun. An organization that calls itself a Human Rights Council once again proved that it is hypocritical and biased and that its goal is to harm Israel and to support terrorism. But is has mostly proven that it is irrelevant.”

“Hamas, the Palestinian ISIS and an internationally recognized terror org, now thanks the UNHRC, its commissioner & voting countries for their resolution.

When a terror org whose goal is to destroy a UN member state THANKS a UN body, you know that this UN body is morally bankrupt

“This is for the #UNHRC & those who voted for the pro-terrorism resolution yesterday. This is a mass Hamas-led attempt to breach the border & infiltrate a nearby Israeli village. The attackers carried knives & axes in order to murder our people. We defended them. We always will.” 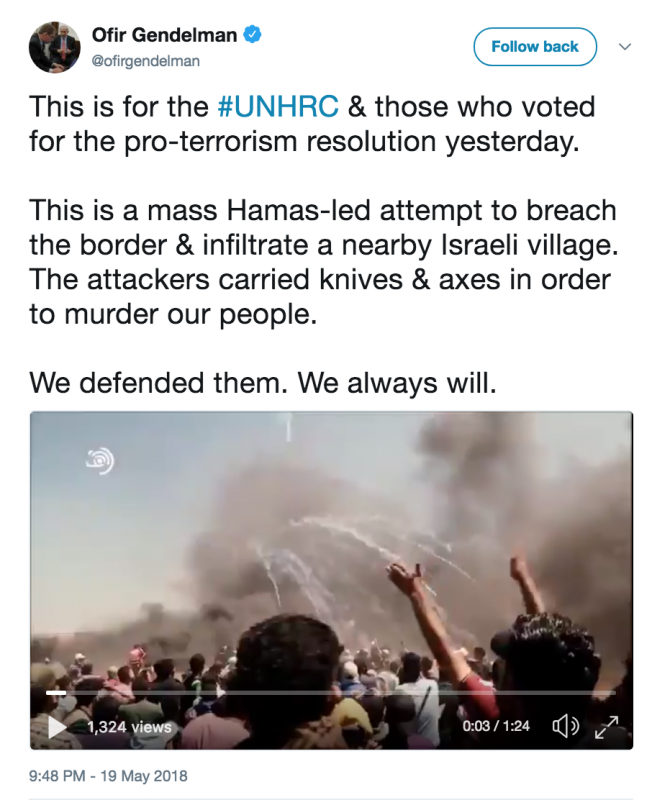 “The only investigative Committee to establish is to investigate how the Human Rights Council became a supporting group to terrorists.” 1

III. Against President Mahmoud Abbas and the Families of Palestinian Prisoners and Martyrs

"Abbas’s body is drenched with antisemitism, from head to toe. He continues the tradition of his predecessors, the Grand Mufti who was a friend of Hitler, and Arafat, an arch-murderer of Jews"

"He fills the minds of the next generation with the poison of antisemitism. Peace will come from the public, not from a corrupt and antisemitic Palestinian Authority,” he said.

“Tired of being suckers. Arrest the PA for murderers and their families.” 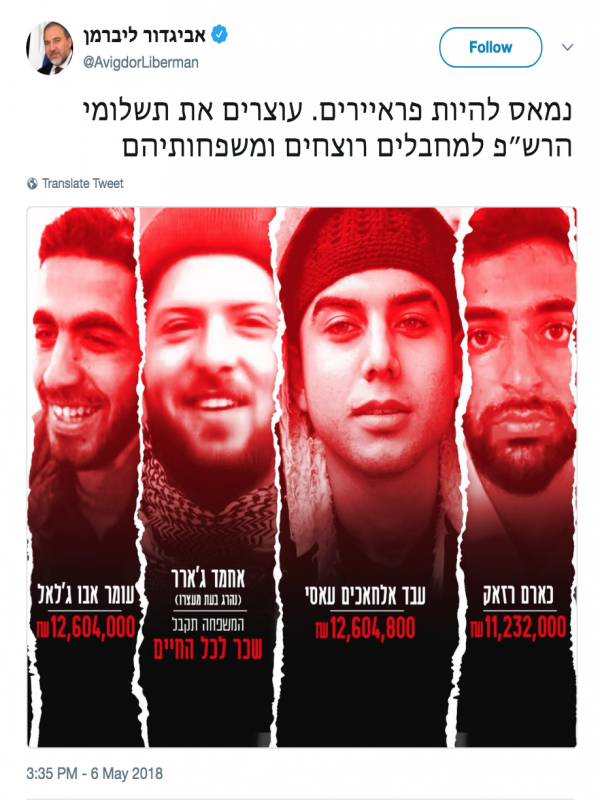 “Close to Abu Mazen's faucet. The law that allows the Palestinian Authority to offset the funds that the PA is transferring to terrorist families has now passed through the Knesset in the first reading. We will act to move it in a second and third call as soon as possible. This madness, which we transfer money to the Palestinian Authority, which is used to encourage terrorism against us – will stop.”

“I wish the Nazi terrorist Abu Mazen meets with God soon. If he needs help then we can take care of it. But he needs to be prepared, he has a lot of explanation to do.”

"Every day that passes and Odeh and his partners are going around freely cursing police officers is a failure of the law enforcement system. Those people belong in prison rather than the Knesset. It's time for them to pay for their actions."

Avigdor Lieberman (Ma’ariv, May 21, 2018) on the Palestinian citizens of Israel

“We witnessed a phenomenon of Israeli citizens aligning with Hamas against IDF soldiers, against the security forces in Haifa. We could philosophize and talk about freedom of speech, but I suggest that we not ignore reality. This is a fifth column in every sense.”

MK Oren Hazan (Twitter, May 23, 2018) on sending the Israeli police officer, who broke the knee of Mossawa's2 Director Jafar Farah during his arrest, on forced leave for the duration of the investigation into this incident

“The policeman was fired? If I am the Minister of Public Security, the policeman receives an immediate promotion from me and at the same time sends the Palestinian terrorist supporter "injured," in the picture, to the Gaza Strip for a liquidation process with a one-way ticket.” 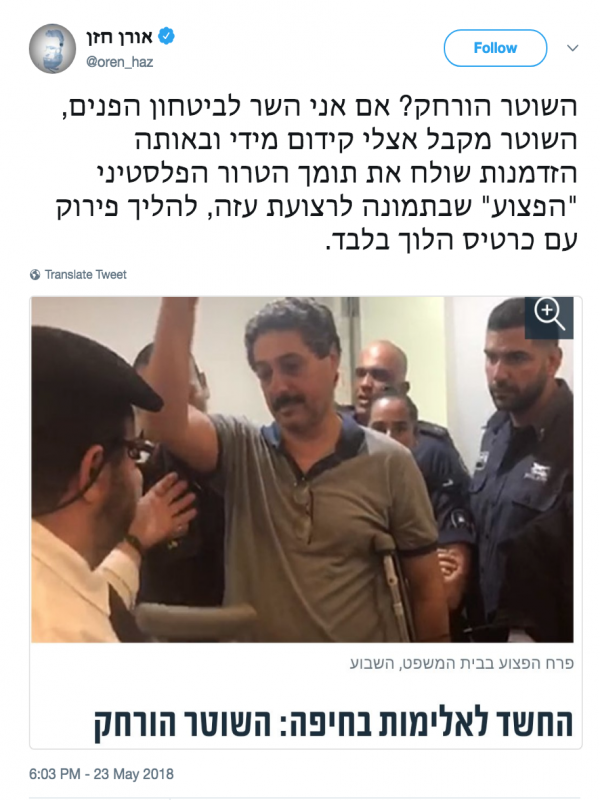 Avigdor Liberman (Twitter, May 24, 2018) on the approval of building more Israeli Settlement Units in Occupied Palestine

Israel’s Aggression on the Gaza Strip 5 – 7 August 2022 [56 Hours]
August 11, 2022
Media Briefs
Israeli Official Incitement: May 2022
June 13, 2022
Israeli Incitement Reports
The Fascist March and the Celebration of Occupation and Oppression of the People of Palestine
June 07, 2022
Media Briefs
Back to top