I. Families of Palestinian Prisoners and Martyrs

“It’s forbidden. Forbidden in any way to release any terrorist in return for the bodies of our soldiers. We must bring back our sons to be buried in Israel by pressuring Hamas (when there will be a real right wing government) and not by releasing terrorists who are endangering the citizens of Israel.”

“The high court of justice is destroying with its own hands the remainder of Israeli deterrence. It is enough to feel sorry for the ruthless killers and their families! A house where a bad terrorist has grown up must be demolished.”

“I request the PM to approve the law of demolishing the homes of terrorists’ families, which I submitted to the ministerial committee for legislation, and it is still pending. It is our duty to deter and save souls, it is our duty to protect the security of Israel, and our moral duty as well towards the families of the victims of terror.”

“We started today the second step of legislating a law that prevents shortening prison sentences for terrorists…so that we won’t witness the early release of any terrorist.”

“I had to tolerate all this hypocrisy that I heard, whom are you defending and whom do you want us to fund? The one who said “ but if I get hungry I eat the flesh of my usurper” (in reference to a poem by Mahmoud Darwish) , or Darin Tatour who was jailed due to her incitement as well as Jaffa theater which hosted a workshop to support her inciting poems. You are defending the terrorist Walid Daqqa and Al-Maidan Theater as well which organized an event for this terrorist, do you want me to fund this event? No No. I will neither fund this event nor Darin Tatour’s writings nor any other male or female terrorist.”

“…in the last two years Lieberman has destroyed the Israeli deterrence, the terrorists are not scared. They know that their homes won’t be demolished and that their families will get 12000 Nis a month as an award in glorification of the martyrs. We will put to vote the law of expelling terrorists’ families so that they will be scared again.”

“Today we will submit a bill to deport terrorists’ families to force the defense Minister Avigdor Lieberman to deter terrorists. The basic problem is that there is a financial incentive to become a terrorist, the terrorists are not scared anymore. Try for a moment to think like the 23 years old Palestinian terrorist; he feels that something is not good in his life, what is the chance? He goes and murder Jews, and if he kills he will become a martyr a national hero, a decent funeral will be held for him, not just that but he will receive a monthly allowance of 12000 Nis lifelong…and if you don’t murder Jews and ends in jail your family won’t be punished and the conditions in jail are not that bad, it is simply very tempting…”

“By immediately deporting the terrorist’s family there will be deterrence that would save lives. But when judicial proceedings last for weeks and months then the deterrence will be inactive…”They bomb-we contain and damage the walls and planks-they threaten "the enemy does not expect what comes..." I said, Hamas does not interpret the our behavior as moral power but as weakness and fear. The government must stop considering the enemy and start eliminating terrorists, even at the cost of harming innocent people, only so will we restore the silence and deterrence gone.

“As a citizen I wished to enter and destroy them which is the initial feeling let us destroy and bombard them, but sometimes we need to study all the elements..”

“I have serious criticism against the decision to ceasefire. We had to hit Hamas hard even if it meant more escalation and missiles on Tel Aviv…”

“Regarding the security policy, my position is clear: we must destroy Hamas terrorist infrastructure in Gaza.”

“Apparently, two years were not enough to eliminate Haniyeh within 48 hours, as he promised. However in return, 48 hours (of security escalation) were enough to end Lieberman’s tenure as Defense Minister.”

“They bomb – we contain them and strike the walls and buildings – They threaten “the enemy should not expect what will happen” and I have said earlier, Hamas does not interpret our merciful behavior as a moral power but as weakness and fear. The government must stop taking into consideration the enemy and start eliminating terrorists even at the cost of harming innocent civilians. This is the way to restore calm and deterrence...”

“ ….deterring Hamas and making a settlement against Hamas not with Hamas. The government is trying to reach a settlement with an Islamic terrorist organization, Netanyahu calls them “Daish” and he is right..”

“The dangerous event that took place this evening when a Palestinian from Gaza strip crossed into the Israeli territory and burned a greenhouse, proves that the transfer of the Qataris money is unequivocally a protection to Hamas terrorist organization. A terrorist organization does not stop terrorism when it fulfills its demands, on the contrary, tonight we have seen this. Terrorism doesn't stop by news headlines and talks, and not by money as well.”

“We won’t remain silent, I will dismantle any illegal construction that undermines our sovereignty as a state. We must immediately evacuate Al-Khan Al-Ahmar. I had a field tour and I saw that Al-Khan Al-Ahmar has extended towards the main road to Jerusalem, our eternal capital. The PA is exploiting this community to block the territorial contiguity between Jewish communities and Jerusalem. They aim at consolidating Fayyad’s plan, in brief – Palestinians controlled area C the area that is under Israeli full control! Meanwhile, the PA is intimidating the Bedouins and preventing the achievement of an appropriate solution. Unfortunately, the EU is also working against us on this issue, it is installing illegal buildings and violates the sovereignty of Israel in the area…” 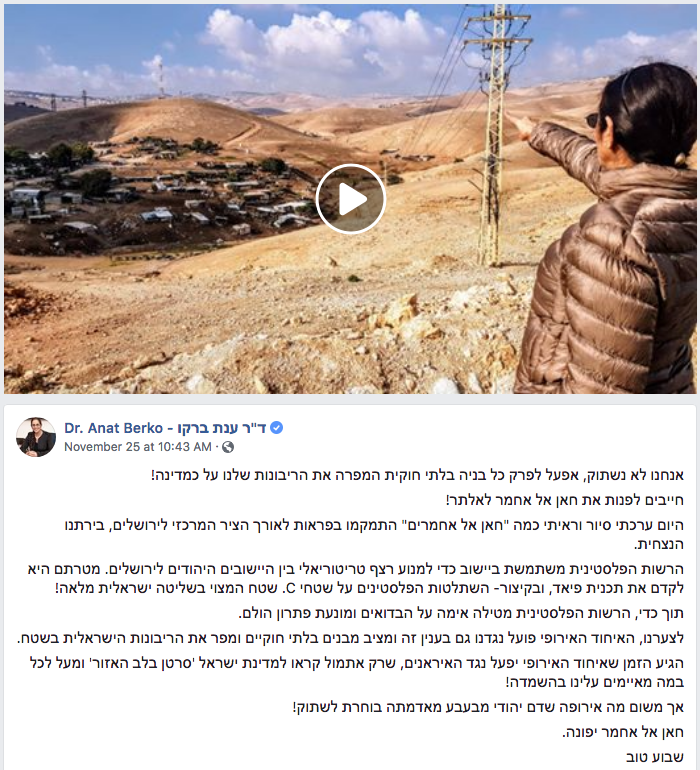 “Al-Khan Al-Ahmar is another attempt to undermine Israel’s sovereignty funded by the EU to take control of the state of Israel. It is time to act according to the law and evacuate Al-Khan Al-Ahmar. We call upon the PM and the defense minister Lieberman to exercise their power and stop the control of the PA, and in this case there is no excuse for the high court of Justice or any other party. Stop making excuses, evacuate today the illegal outpost and arrest the lawbreakers.”

“…the Arab Joint List is known of its hatred towards Israel, they are celebrating it in the social media particularly Balad party that decided to boycott the Knesset for one month. So far, one month passed while they are receiving salaries for free without coming to Knesset. It is time to expel Balad (and its members: Al-Zoabi, Zahalqa….among others) permanently from the Knesset and the sooner the better.”

“It is time to oust Balad out of the law. There is no place in the Knesset for those who exploit the Israeli democracy to destroy the state…”

“Balad is using the money of the public to give a podium to the barbaric terrorist [prisoner Walid Daqqa] at the expense of the citizens of Israel and the bereaved family of the solider..this is a legalization of the a terrorist operation.”

“The using of parties’ money by Balad to support terrorists is another evidence to prevent them from running Knesset elections.” We must evacuate Khan to Ahmar immediately! The PA uses the settlement to prevent a territorial continuum between the Jewish settlements and Jerusalem. In addition, the PA lays terror on the Bedouin and prevents a proper solution. Unfortunately, the EU is working against us, instead of condemning the Iranians calling for the destruction of the State of Israel.

“Anywhere else in the world jailing someone for selling land to Jews would be considered a hate crime. So why is the world silent when the perpetrators of that hate and even its victims are Palestinian? I call on all human rights organizations to condemn PA racism right now.”

MK (Jewish Home) Bezalel Smotrich (Twitter, 11 November) commenting on a Tweet by settlers’ organization Regavim posted on November 8th in which it accuses Palestinians of carrying out ‘terror acts’

“The PA’s agricultural control in area C in Judea and Samaria (the occupied West Bank) is a dangerous strategic move that we must stop!”

“The state of Israel is awaiting the approval of Abu Mazen (non-partner) as well as the approval of Hamas terrorist organization to reach an agreement. Once again, the government of Israel is led and not leading, once again, we do not know what would the agreement include and whether the balloons, riots on the fence…will continue.”

“The ministry lately revealed a rooted relationship between BDS and terrorist organizations. BDS is funded and led by activists from Muslim brotherhood, and the PFLP among others….instead of defending children who are used by Hamas as human shields every Friday in the “Marches of Return”, they work against the State of Israel and calls for its destruction…”

“We cannot imagine that the State of Israel will be capable of combating organizations such as B’Tselem and Breaking the Silence with one hand, and renew the mandate of the TIPH in Hebron with the other hand. Like the extreme left wing organizations, TIPH works in Hebron to throw the blame on Jews and spread it around the entire world. We in the foreign affairs and defense committee requested …not to renew its mandate.” 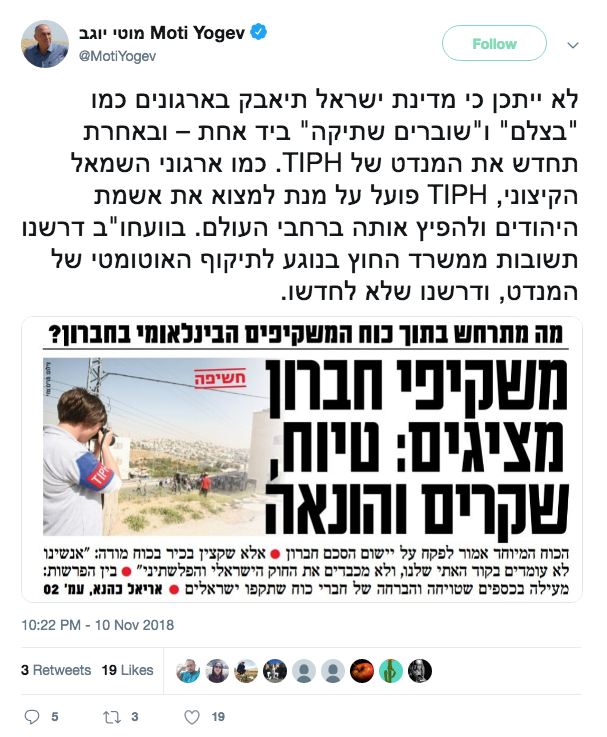 “In the wake of the occurrence of consecutive popular terror acts near the junction of Jit between Jenin and Nablus and Ramallah, the IDF installed new military site on that junction to consolidate security in the area, the IDF will be present there to give the appropriate security response for each incident…” 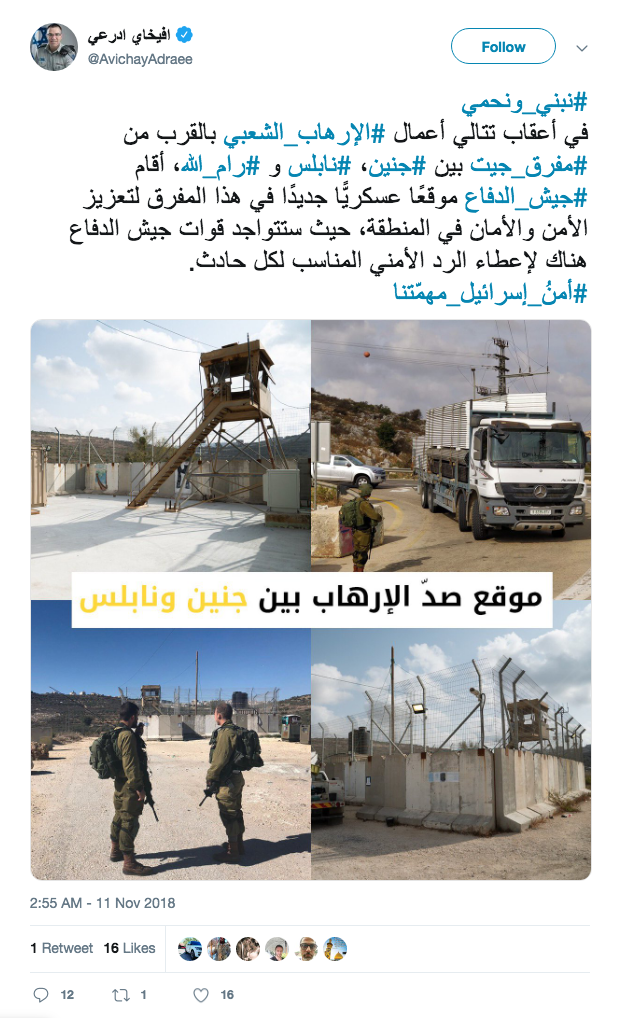 “Do you want us to fund films such as “Jenin Jenin”?

“Do you want us to fund those who are calling for our destruction?”

“Do you want us to fund those who glorify terrorists?

“This will never happen…”