The Israeli leadership’s recent, criminal decision to expropriate around 4,000 dunums (almost 1000 acres) of Palestinian land, represents the largest Israeli land grab in the Occupied State of Palestine in three decades. The leadership intends to build a new settlement-city called Gvaot on the lands of five Palestinian villages in Western Bethlehem, known by Israel as the “Gush Etzion bloc”, an occupied area that Israel aims to illegally annex. This move is further proof of Israel’s relentless policy of destroying the prospects for a negotiated peace and an independent Palestinian state, living side by side the State of Israel in peace and security. Such moves are emboldened by the culture of impunity granted to Israel by the international community.

The Illegal Settlement of "Gvaot"

The area that Israel refers to as “Gush Etzion” is a network of Israeli settlements located mainly on the western side of Bethlehem linked by Israeli settler bypass roads. It goes from Beit Jala (Har Gilo settlement) in the north to Beit Ummar (Migdal Oz settlement). It takes occupied Palestinian lands from the districts of Bethlehem and Hebron and sits on more than 72 km.² It is promoted by the Israeli Ministry of Tourism as “picturesque rolling hills adorned with grape arbors and olive groves,” including various settlement business, mainly wineries. The largest settlements in the Western Bethlehem area are Betar Illit with a population of 42,400 settlers (population in 1995 was 5,500 settlers) and Efrat (around 08,000 settlers, compared to the 3,500 after the Oslo Agreement was signed). There is an extension of Etzion called by Israel “East Etzion”, including the settlements of Tekoa, Nokdim and Kfar Eldad, in the eastern side of Bethlehem.

The “eastern section” also includes Israeli control of the “Herodion area” one of the most important heritage sites in Palestine, administered by the Israeli Parks Authority. Some of the prominent settlers in the area are the Moldovan-born Israeli Foreign Minister, Avigdor Lieberman (Tekoa settlement), and the Ukrainian-born Chairman of the Foreign Relations Commission of the Israeli Parliament, Zeev Elkin (Kfar Eldad), and former Israeli Parliament speaker, Yuli Edelstein (Neve Daniel).

There are 10 Palestinian villages in the Western Bethlehem Area. The largest of these are Al Wallaja, Battir, Husan, Nahhalin and Wadi Fukin, which are home to over 20,000 people. The area is known as the bread basket of Bethlehem (formerly of Jerusalem) and is known for its ancient agricultural terraces, olive groves and irrigation systems. Last June, the Battir Area (including the Makhrour Valley in Beit Jala and Al Khader) was inscribed as a World Heritage Site by the State of Palestine at UNESCO. According to Israeli plans, all this area will be separated from the rest of Bethlehem after the annexation Wall is completed, obstructing Palestinian access to its lands, jobs, hospitals, schools, universities, heritage and religious sites, as well as to commerce.

Israel created the term “settlement bloc” to refer to a fixed area unilaterally defined by Israel, representing all the illegal settlements in that area and the land and infrastructure in between. The use of this terminology is deliberate, and is meant to facilitate the colonization of more land and to thwart the emergence of a genuinely independent and contiguous Palestinian state, making a negotiated outcome implausible. It is important to note that there is no difference between Israeli settlement blocs and other Israeli settlements. Any attempt to legitimize settlement blocs would would contravene international law and the principles of third-state responsibility.

Israeli settlers terrorize Palestinians. The “Gush Etzion” area, due to its strategic location (between Jerusalem and Hebron) continues to be one of the most attractive areas for ideological settlers. Daily attacks and harassment are committed against Palestinians under the permissive presence of Israeli Forces. Examples of such acts include the stoning of Palestinian cars or blocking roads for Palestinian traffic. They also include the harassment of Palestinian farmers (including cutting trees and burning groves), which is often aimed at stealing Palestinian lands for the establishment of settlement outposts.

The Illegality of Israeli Settlements

Settlements are illegal under international law. The Rome Statute assigns individual criminal liability for the following crimes, amongst many others implicated in Israel’s settlement policy: “the transfer, directly or indirectly, of the Occupying Power of parts of its own civilian population into the territory it occupies, or the deportation or transfer of all or parts of the population of the occupied territory within or outside this territory”, “the annexation by the use of force of the territory of another State or part thereof”, “the appropriation of property not justified by military necessity and carried out unlawfully and wantonly”, and “apartheid”. Settlements are also violative of the fundamental human rights of the Palestinian people as defined under customary international law and core human rights treaties. Many UN resolutions reaffirm the illegality of Israeli settlements in all the territory of the Occupied State of Palestine, including East Jerusalem. Some of these include Security Council Resolutions 446 (settlements as serious obstruction to peace, violation of IV Geneva Convention), 476 (settlements “have no legal validity and constitute a serious obstruction to achieving a comprehensive, just and lasting peace in the Middle East”), 452 (cease settlement construction), 465 (calls upon member states not to assist Israel in settlement plans) and 476 (calling Israeli policies to change Jerusalem’s status as “null and

The village of Wadi Fukin (1238 inhabitants) is one of the most traditional rural communities of the Bethlehem area, located 9.4 km south west of Bethlehem City. The area goes back to 1800 years and is known for its agricultural products as well as for its ancient irrigation systems. In 1948 the village lost lands in what became the State of Israel. Currently the village is surrounded by the Israeli settlements of Betar Illit and Hadar Ellit, both built on confiscated village land. The village has been completely trapped between the Israeli settlements and the 1967 border. Due to Israeli settlement expansion, only 2000 dunums are left for the village out of originally around 12000 dunums in 1948.

The village of Jaba’ (1200 inhabitants) is an agricultural rural community located between the Bethlehem and Hebron districts, one of the most fertile areas in Palestine. Most of its lands have been confiscated for the expansion of Israeli settlements and its related infrastructure (including the Wall, bypass roads and checkpoints), turning the village into an isolated Bantustan surrounded by Israeli settlements, separated from the main Palestinian towns in the area: Nahhalin and Surif. The latest Israeli plan will leave it completely engulfed between a road for settlers built on confiscated Palestinian land (Road 367) and the confiscated areas. Any future expansion of Jaba’ has been thus effectively blocked by Israeli settlements in the area. 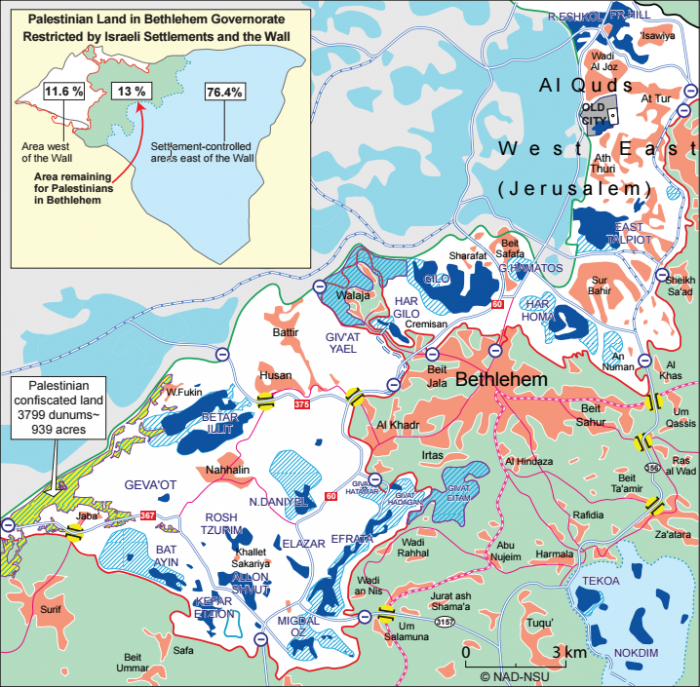