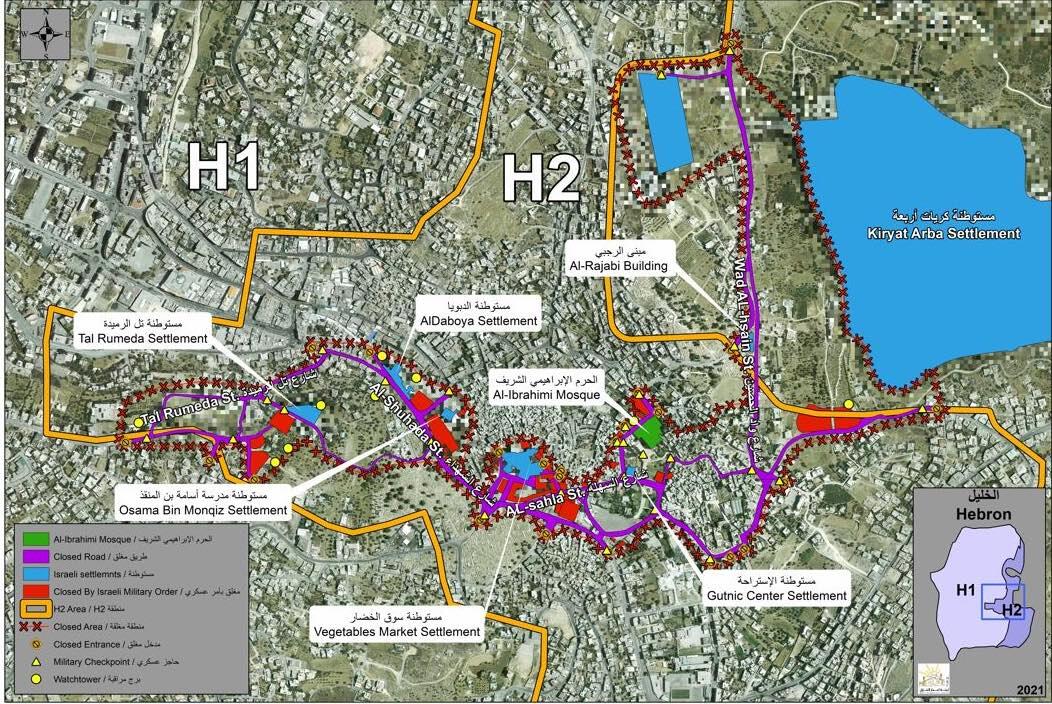 Hebron's Old City, including Al-Ibrahimi Mosque, is one of four sites recognized as World Heritage sites in occupied Palestine: The Walls and Old City of Jerusalem, Battir inscribed as "Land of Olives and Vines — Cultural Landscape of Southern Jerusalem," and the Church of the Nativity and the Pilgrimage Route in Bethlehem. Following the inscription of Hebron's Old City as a World Heritage Site in 2017, as well as on the official List of World Heritage in Danger, both the US and Israel announced their withdrawal from UNESCO in protest of what they called "anti-Israel bias," which implicitly meant an objection to Palestinian national and human rights, including the recognition of our heritage and cultural rights.

East Jerusalem and Hebron are the only two cities in occupied Palestine with Israeli colonial settlements inside their urban residential areas. Like Jerusalem, the 1995 Oslo Interim Agreement also excluded Hebron city, but an additional document, the Hebron Protocol, was signed and added to the interim agreement in 1997. The Protocol split Hebron city into two parts: H1 was placed under Palestinian control, and H2 remained under the occupying Power's military rule. This part of Hebron constitutes 20% of Hebron city with a population of approximately 45,000 Palestinians, whose livelihoods and movement are restricted and controlled by Israel's occupation force of hundreds of soldiers in addition to 600 settlers illegally occupying the (1) Palestinian central vegetable market (Avraham Avinu settlement), (2) Usama ibn Munqidh School (Beit Romano settlement),  (3) the Palestinian landmark known as Daboya used for several purposes before 1979 (Beit Hadassah settlement), (4) part of Tel Rumeida, where Israeli settlers were allowed to build permanent structures in 2003 (Ramat Yishai settlement), and the (5)  home of the Palestinian family Al-Rajabi (Beit HaShalom settlement). Israel's expansionist colonial project and associated policies undermine and violate Hebron Protocol and its purpose, and evidently international law and norms, as well as the sanctity of Hebron as a UNESCO world heritage site.

"Both sides reiterate their commitment to the unity of the City of Hebron, and their understanding that the division of security responsibility will not divide the city. […] both sides share the mutual goal that movement of people, goods and vehicles within and in and out of the city will be smooth and normal, without obstacles or barriers."

- Article 9 of the Hebron Protocol.

This brief focuses on the current situation and latest developments in the occupied part of Hebron City, which continues to suffer from further Israeli violations while our world is facing the most challenging times under the COVID-19 pandemic.

The occupying Power's targeting of Hebron governorate as a whole and specifically the occupied part of Hebron City with segregation and apartheid policies aim to take control over the areas starting from Tel Remide, Jabal Rahme, Shuhada Street, Ibrahimi  Mosque, to the entirety of Old City and its surroundings, thus connecting them to the colonial settlement of "Kiryat Arba" and eventually to Jerusalem. In the process, Israel aims to displace Palestinians forcibly and to transform these integral parts of the city into an exclusively Israeli- Jewish area. Already, Israeli settlers have installed Israeli flags in the Old City and have also changed the names of the neighbourhoods from Arabic to Hebrew.

The Israeli military has also enforced a permit regime, which obliges every Palestinian to give their ID number to the soldiers upon crossing the checkpoints. Palestinian neighbourhoods are isolated with approximately 130 movement restrictions, including 20 permanent checkpoints, rendering the movement of Palestinians restricted and their daily lives disrupted2. Palestinians living in the occupied part of Hebron City are also isolated from the rest of the city, and often it's hard for them even to leave and return to their homes.

The reality of apartheid in the occupied part of Hebron City is increasingly more systemized. Therefore the suffering of Palestinians is increasing by the day, aiming to create a coercive environment that leaves no option for Palestinians but to leave. Israel systematically denies Palestinians access to essential services, including health, education, water, and electricity. Palestinians are also being subjected to arbitrary arrests and extrajudicial killings at the hands of Israeli soldiers and settlers. And while Israeli settlers continue to harass and physically attack Palestinians and take over and destroy their properties, the occupying Power continues to punish Palestinians even when peacefully protesting against their oppression and oppressors.

In 2017, the Israel occupying authority issued military order 1789 to upgrade the status of settlements inside Hebron's Old City by establishing a "civil services administration" for its illegal settlers. The order "confers legal personality to the new administration and specific powers, such as the Power to purchase and renovate property, provide municipal services, and legally represent the settlers. This amounts to a consolidation of the settler presence in Hebron." In the same year, a new fence was installed around Al-Salaymeh and Gheith neighborhoods, separating 50 families from the rest of the city and limiting their access to basic services. A gate has been installed that opens at 6 AM and closes at 11 PM, which adds to the suffering of the Palestinian residents, especially students who have to wait, not knowing when the gate will open to reach their schools on time.

In 2018, the occupying authority expanded the control of a military point it occupied in 2003, located in Al-Takruri Mountain in the H1 part of Hebron overlooking the Old City, to turn it into a large military base. The seized land is a private Palestinian property belonging to the Amr family and extends over an area of 2 dunums (approximately half an acre). This is in addition to approving a building permit of 31 housing units for a new settlement on Shuhada Street, marking the first fully-fledged building of a colonial settlement from the ground up in nearly two decades. In the place of the Palestinian central bus station, the construction of this settlement started at the end of October 2021, and it's expected that it will lead to the further closure of this area and the increase of the number of colonial settlers, roadblocks, checkpoints, and more attacks on Palestinians. Also, in 2018, The Israeli occupying authority and its arms, including Israel Antiquities Authority and  Nature and Parks Authority, held an opening ceremony for a touristic settlement, a new colonial project in Tel Rumeida.  The Israel Antiquities Authority and the illegal University of Ariel had previously conducted archaeological excavation in the exact location.

In early 2019, and after a leaked report issued by the Temporary International Presence in Hebron (TIPH) documenting 40,000 Israeli violations covering 20 years of its work, Israel expelled TIPH and terminated their presence in Hebron: an additional step towards Israel's nullification of all signed treaties, including the Oslo Interim Agreement. Consequently, during 2019 alone, UNOCHA recorded a peak in Israel's settler violence with 47 incidents resulting in causalities and property damage, compared to 23 incidents in 2018 and 12 incidents in 2017. The Israeli organization Peace Now reported end of 2019 that an Israeli police document proved that the removal of TIPH was political: "What is revealed here is almost unbelievable. Apparently, the only reason for the government's decision to go back on an international agreement and damage Israel's foreign relations and image by deporting TIPH was to placate demands from settlers and right-wing organizations (….)."

In May 2020, the Israeli occupying authority issued yet another decision to seize additional sections of the Ibrahimi Mosque and revoke the legal and administrative powers of Hebron's Municipality and Directorate of Religious Endowments and transfer it to the Israeli military commander in the occupied West Bank.

In August 2021, and to facilitate the access of Israeli settlers, infrastructure work began for building corridors and installing an elevator inside the Ibrahimi Mosque. Other Israeli violations inside the Mosque are ongoing, including, without any justification, preventing Palestinians from carrying restoration work, thus exposing the remaining parts without restoration to damage, and obstructing the entry of the Mosque's employees at different times.  For Palestinians, the entrance to the Mosque feels like entering a military barricade after the installation of massive gates that distort its architectural image and violate the Mosque's integrity as a holy site. It's important to note that in June 2021, the occupying forces and settlers demolished "a 400-square-meter Palestinian historical neighborhood, locally known as Hosh Qafisha and Sharif, near the Ibrahimi Mosque."

Colonialism and apartheid remain an open wound in Palestine. Today marks 104 years since the signing of the Balfour Declaration, which is a reflection of the Zionist project that continues to this very day, as exposed in the case of the occupied part of Hebron City that many Palestinians can't access, to deny the right of the people of Palestine to their human and national rights, including the right to preserve our cultural heritage.

The international community is responsible for providing international protection for the people of Palestine and their endangered cultural heritage. The case of Hebron clearly tells about how the Israeli occupying authority and settlers continue to threaten the security of Palestinians, livelihoods, way of life, and very presence on their land. The only way to protect the two-state solution is to actively work towards ending 54 years of Israel's occupation and oppression.