The following summary tables and overview of events survey hostile Israeli activities during the period 01 April 2016 to 30 April 2016. The report includes a summary table of events, classified by type, throughout the West Bank and Gaza Strip, in addition to a comparative table surveying events over the past three months. The survey is compiled from the Daily Situation Reports of the Palestinian Monitoring Group (PMG) of the Negotiations Affairs Department (NAD) of the Palestine Liberation Organization (PLO). The PMG monitors ground conditions in the West Bank and Gaza Strip, including Israeli and Palestinian violations. The PMG Daily Situation Reports are a survey of daily events collated from information provided by civil ministries and security agencies of the Palestinian National Authority. The information reported through the PMG process represents data available at the time of distribution only.

Summary Table of Events in the Occupied Palestinian Territory – April 2016

Killings: A total of 3 killings were reported in the month of April 2016 including:

A total of 68 injuries were reported in the month of April 2016 (51 Palestinians in the West Bank and 17 in the Gaza Strip). Injuries included 13 children, a Woman and 2 fishermen.

Especially on Fridays, the Israeli military continues to intensify restrictions at checkpoints located at the entrances of Jerusalem, and to restrict entrance to the Al Aqsa Mosque compound in the old city of Jerusalem, preventing worshipers from accessing the Mosque. At the Qalandiya checkpoint north of Jerusalem, the Israeli military continues to prevent PNA registered civilian vehicles from crossing the checkpoint towards Ar Ram and Qalandiya as well as Dahiyat al Bareed. The checkpoint is overcrowded daily, particularly during rush hours, due to intensified restrictions and search measures applied by Israeli troops. During the month of January the Israeli military also continued to intensify restrictions at the Tayasir checkpoint and Al Hamra junction checkpoint leading to the Jordan Valley area, only allowing access to civilians whose IDs indicate District of Jericho residence or others holding special access permits. In addition, restrictions were intensified and civilian access was obstructed at the Za’tara junction checkpoint (separating the northern and central West Bank districts) as well as at the As Sawahira ash Sharqiya (the ‘Container’) checkpoint (separating the central and southern West Bank districts).

The Israeli military installed 442 flying checkpoints in April 2016 (compared with 527 in March and 422 in February) and as a result restricted the free access and movement of residents, merchant supplies and agricultural goods.

Distribution of Flying checkpoints in the West Bank 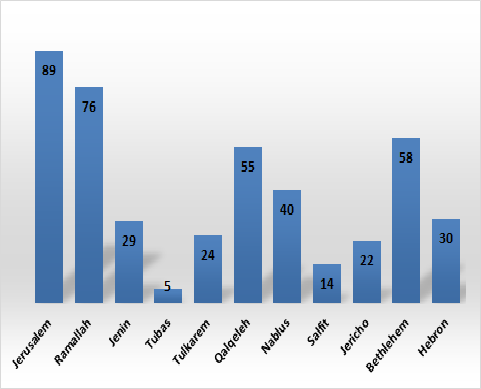 The Israeli military opened fire on 126 occasions during raids and clashes with civilians. (A total of 48%  of attacks). 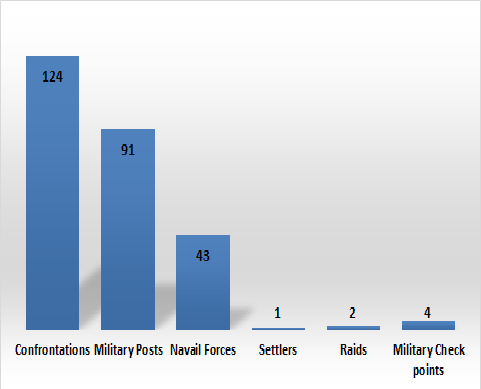 During the month of April 2016, the Israeli military demolished Palestinian homes and residential tents, which consisted of the following:

During the month of April  2016 the Israeli Military served the following Demolition orders:

During the Month of April 2016 Israeli forces occupied 9 homes and converted their rooftops into military posts in the following districts in the West Bank:

A total of 75 incidents of destruction and confiscation of Palestinian public and private property by Israeli settlers and Israeli forces were reported in April 2016 (68 in the West Bank and 7 in the Gaza Strip).

Jerusalem: Israeli forces set fire to several Olive trees as they clashed with several residents during their raid into Qatana village, Israeli forces sealed off the entrance doors and windows {using concrete and steel} of a home owned by the family of a Palestinian Detainee in Sur Baher village and Israeli forces damaged the offices of the Student Union as they stormed and searched Al-Quds University in Abu Dis town.

Ramallah: Israeli forces detonated the main entrance of a home in Silwad town, detonated the entrances to Al-Aajouli Currency exchange and as a result set fire to the building which also damaged a vegetable and Spices shop and Israeli forces also demolished a vehicle repair shop and a Poultry butcher shop in Ni’lin town.

Tubas:  Israeli forces set fire to and destroyed agricultural crops as they were conducting military training in Khirbeit Samra area located in the North Jordan valley.

Qalqiliya: Israeli settler damaged and shattered the windows of several homes after stoning them and punctured the tires of a agricultural tractor during their attack on Fara’ata village.

Salfit: Israeli settlers damaged an shattered the windows of a bus carrying residents after stoning it  near “Emanuel” settlement and Israeli forces damaged a vehicle after launching  tear gas grenades towards it in Salfit city.

Bethlehem: Israeli forces damaged a vehicle as they closed the steel gate as it passed through Al-Container checkpoint and demolished a butcher shop in Beit Sahour city.

Rafah: Israeli Naval vessels opened fire towards and sunk a fishing boat off the shores of Rafah.

Rafah: Israeli Naval vessels confiscated a fishing boat off the shores of Rafah.

62 incidents of Settler violence occurred during the month of April 2016 including:

Ramallah: Israeli settlers stole four heads of sheep near the village of Ras Karkar village, stormed a park in Ein Al-Zarka area near Beit Illu village, stoned residents and vehicles near Eyoun Al-Haramiya junction, stormed the area of Ein Al-Zarka springs  near Deir Ghassana Town, chased several farmers from agricultural land  and attempted to confiscate it  in an attempt to take over the water spring to build a fish pond.

Jericho:   Israeli settler assaulted a 8 year old child near Al-Oja village, placed soil fertilizer on plots of agricultural land owned by The Ministry of Religious Affairs in A l-Oja village and installed steel and barbed wire fencing around the area  as they attempted to confiscated the land.

The Israeli military completely closed crossing points into the Gaza Strip, including access points within the Green Line, on 164 occasions during the month of April 2016. The Israeli military closed crossing points within the Green Line on 104 occasions. It opened Beit Hanun (Erez) Crossing for 22 days for previously-coordinated humanitarian cases and foreign nationals and Karm Abu Salem (Karem Shalom) Crossing for 22 days for transportation of food supplies, humanitarian aid, and cooking gas. In addition to allowing in animal feed, construction cargo designated for UNRWA and internationally-funded projects was transported through the Crossing. Sufa Crossing was closed throughout the month. On the other hand, the Israeli authorities have continued to unilaterally close Ash Shuja’iya (Nahal ‘Oz) Crossing. Beginning on 02 March 2011, the Israeli authorities has also continued to completely close Al Muntar (Karnei) Commercial Crossing.

The Israeli military closed international crossing points on 60 occasions. Rafah Crossing was open for 3 days to allow access to civilians departing the Gaza Strip and to those arriving from Egypt. Yasser Arafat International Airport has remained closed since the outbreak of the second Intifada.