The following summary tables and overview of events survey hostile Israeli activities during the period 01 July 2016 to 31 July 2016. The report includes a summary table of events, classified by type, throughout the West Bank and Gaza Strip, in addition to a comparative table surveying events over the past three months. The survey is compiled from the Daily Situation Reports of the Palestinian Monitoring Group (PMG) of the Negotiations Affairs Department (NAD) of the Palestine Liberation Organization (PLO). The PMG monitors ground conditions in the West Bank and Gaza Strip, including Israeli and Palestinian violations. The information reported through the PMG process represents data available at the time of distribution only.

Summary Table of Events in the Occupied Palestinian Territory –July 2016 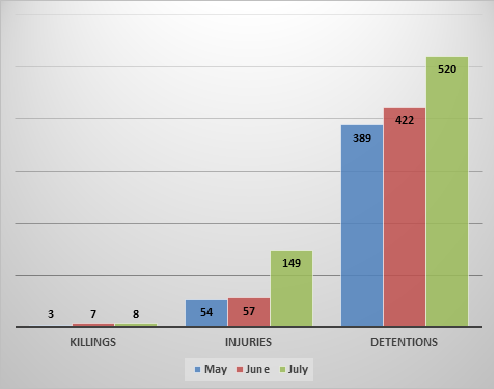 A total of 8 killings were reported in the month of July 2016 including 1 child, 1 Woman and an Elderly resident.

A total of 149 injuries were reported in the month of July 2016 (138 Palestinians in the West Bank and 11 in the Gaza Strip). Injuries included 16 children, 2 Journalist, 4 Women and a Fisherman. 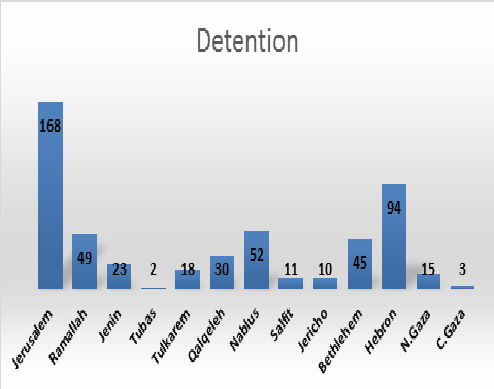 Especially on Fridays, the Israeli military continues to intensify restrictions at checkpoints located at the entrances of Jerusalem, and to restrict entrance to the Al Aqsa Mosque compound in the old city of Jerusalem, preventing worshippers from accessing the Mosque. At the Qalandiya checkpoint north of Jerusalem, the Israeli military continues to prevent PNA registered civilian vehicles from crossing the checkpoint towards Ar Ram and Qalandiya as well as Dahiyat al Bareed. The checkpoint is overcrowded daily, particularly during rush hours, due to intensified restrictions and search measures applied by Israeli troops. During the month of January the Israeli military also continued to intensify restrictions at the Tayasir checkpoint and Al Hamra junction checkpoint leading to the Jordan Valley area, only allowing access to civilians whose IDs indicate District of Jericho residence or others holding special access permits. In addition, restrictions were intensified and civilian access was obstructed at the Za’tara junction checkpoint (separating the northern and central West Bank districts) as well as at the As Sawahira ash Sharqiya (the ‘Container’) checkpoint (separating the central and southern West Bank districts).

The Israeli military installed 433 flying checkpoints in July (compared with 272 in June and 399 in May) and as a result restricted the free access and movement of residents, merchant supplies and agricultural goods.

Distribution of Flying checkpoints in the West Bank 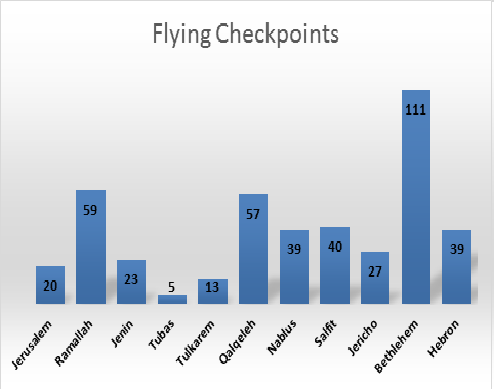 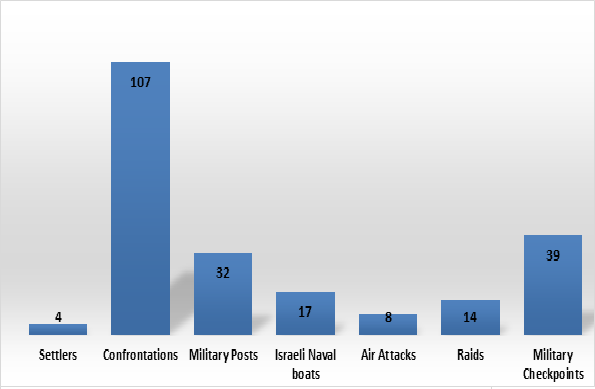 During the Month of July 2016 Israeli forces occupied 6 homes and converted their rooftops into military posts in the following districts in the West Bank:

A total of 89 incidents of destruction and confiscation of Palestinian public and private property by Israeli settlers and Israeli forces were reported in July 2016 (85 in the West Bank and 4 in the Gaza Strip).

Salfit: A group of Israeli settlers damaged the windshield of a vehicle travelling along Wadi Qana road {which connects Salfit and Qalqiliya districts} after stoning it from their positions near “Emanuel” settlement located in north Deir Istiya town and Israeli settlers uprooted several Olive trees and assaulted a woman while they levelled a bypass road as they stormed agricultural land in Deir Istiya town.

Hebron: The Israeli Military blasted open the entrances of 7 apartments and detonated 3 water tanks as they stormed and searched “Abu Madi Building” in Hebron city.

Confiscation of Public and Private Property

North Gaza: Israeli Naval Officers confiscated a fishing boat as they detained 4 fishermen after their Naval vessels chased and opened fire towards a Palestinian fishing boat off the shores   of Al-Sudaniya area in west Beit Lahiya town.

On July 2nd 2016, the Israeli government issued tenders for the construction of 42 settlement unites in "Kiryat Arba" settlement located on land in east Hebron city.

On July 3rd 2016, the Israeli Government approved plans for the construction 850 settlement unites {650 in Maale Adumim" settlement and 200 in "Pisgat Ze'ev" and "Har Homa"} on Palestinian owned land in Jerusalem city occupied in 1967.

On July 13th 2016, Israeli Authorities issued tenders for the construction of 90 settlement units in "Gilo" settlement located in South Jerusalem city on land occupied in 1967.

On July 18th 2016, Israeli Military bulldozers leveled a plot of agricultural land in Al-Eiyoun area located in east Kafr Thulth town after they declared the land as confiscated property.

On July 27th 2016, the Israeli authorities issued bids for tender for the construction of 323 new housing units in Jerusalem settlements (130 in Har Homa settlement, 89 in Gilo, 68 in Pisgat Ze’ev and 36 in Neve Yacov) on land occupied in 1967.

40 incidents of Settler violence occurred during the month of July 2016 including:

Jerusalem: Israeli settlers attempted to set fire to Faysal Gate {A main gate entrance leading to Al-Aqsa Mosque compound} during which local residents were able to prevent the attack and chase the settlers from the area.

Ramallah: A Israeli settler vehicle travelling near Deir Qaddis village in Ramallah & Al-Bireh district ran over Ayed Daud Nasser and as a result left him hospitalized with contusions.

Tubas: A group of Israeli settlers stormed Ein Al-Hilweh area located in the North Jordan valley opened fire towards a herd of cattel owned by Adel Aliyan Daraghmeh and as a result killed a cow.

Qalqiliya: A Israeli settler vehicle travelling near the entrance of Izbit Al-Tabib village in Qalqiliya district ran over Alaa Raed Rishad Shabtiya {A resident of Azzun town}and as a result left her hospitalized with contusions and several Israeli settlers levelled a plot of agricultural land located behind the wall in Jayyus town.

Nablus: A group of Israeli settlers positioned near “Yitshar” settlement junction located in North Huwara town stoned several vehicles travelling along the main road near the settlement, a group of Israeli settlers travelling in a vehicles stormed Nablus city in an attempt to enter “Joseph’s Tomb” area  during which they were chased away by a Palestinian Police vehicle guarding the site, Israeli settlers stormed the east area of Burin village in Nablus , attacked a home owned by Bashir Al-Zabban and assaulted him, The head of Security for “ Yitzhar” settlement stormed Einbus village in Nablus and interrogated several children in the area, Israeli settlers stormed Duma village and hurled a fire bomb towards the home of Mohammad Raqi Abdel-Fattah Dawabsheh and as a result set fire to several sets of furniture located on the 2nd floor of the home.

Bethlehem: Israeli settlers from “El'azar” settlement stormed a plot of agricultural land  located in Al-Zaytuneh area in Al-Khader town and uprooted several Grape vines, damaged a main gate entrance to the plot of land owned by Ibrahim Mohammad Hussein Salah {A resident of Al-Khader}, a group of Israeli settlers positioned along the main road near the west entrance of Teqou’ town and impeded the free flow of traffic as they chanted anti-Arab and racist slanders towards residents travelling in their vehicles during which Israeli forces fired rubber coated steel bullets , stun and tear gas grenades towards several residents as they attempted to prevent the settler attack and as a result injured a resident and left several others suffocated from tear gas inhalation, two Israeli settlers from “Efrata” settlement located in the south area of Al-Khader town assaulted and used a Taser gun against Daud Yahya Musa as he was working in a car wash located in Um Al-Rakaba area in Al-Khader town and as a result left him hospitalized with contusions , a group of Israeli settlers from “Beitar Illit” settlement  set fire to a plot of agricultural land in Husan village and as a result destroyed 150 Olive trees on approximately 35 hectares of land owned by Imad Al-Sha’er and a group of Israeli settlers stormed Al-Ghathra area located Al-Khader town near “El'azar” settlement and assaulted 3 residents: Samer Bakr Ghanim, Ahmad Attiya Ghanim and Islam Attiya Ghanim during which another Israeli settler stoned and opened fire towards several residents in an attempt to keep them away from the area then withdrew under the protection of Israeli Military forces.

The Israeli military completely closed crossing points into the Gaza Strip, including access points within the Green Line, on 167 occasions during the month of July. The Israeli military closed crossing points within the Green Line on 108 occasions. It opened Beit Hanun (Erez) Crossing for 26 days for previously-coordinated humanitarian cases and foreign nationals and Karm Abu Salem (Karem Shalom) Crossing for 21 days for transportation of food supplies, humanitarian aid, and cooking gas. In addition to allowing in animal feed, construction cargo designated for UNRWA and internationally-funded projects was transported through the Crossing. Sufa Crossing was closed throughout the month. On the other hand, the Israeli authorities have continued to unilaterally close Ash Shuja’iya (Nahal ‘Oz) Crossing. Beginning on 02 March 2011, the Israeli authorities has also continued to completely close Al Muntar (Karnei) Commercial Crossing.